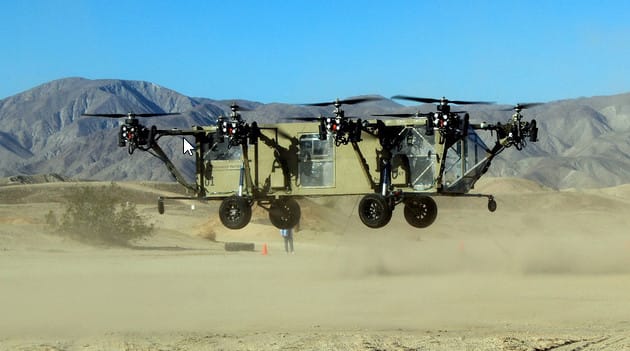 Advanced Tactics' (AT) autonomous Black Knight Transformer may not be small enough to get eaten by an aircraft's engine, but it still falls under the purview of the FAA after completing its first flight. The large and unwieldy-looking beast is lifted by eight motors that swing out from the frame for flight -- though sadly, we don't get a glimpse of the transformation. Designed as a transport system for modular payloads, AT dreams of someday seeing its creation floating a boat by attaching to an amphibious hull, or hauling cargo without the need for a human pilot. In the video after the break, the Transformer slowly putters about and then demonstrates a low altitude hover. Future iterations could see the Black Knight hovering on station for up to 19 hours carrying 150lb (68kg) of ISR gear or delivering up goods with up to 1.75-ton weight limits.

Via: Autoblog
Source: Advanced Tactics Inc
In this article: autonomous, drone, transformer, transportation, truck, vtol
All products recommended by Engadget are selected by our editorial team, independent of our parent company. Some of our stories include affiliate links. If you buy something through one of these links, we may earn an affiliate commission.