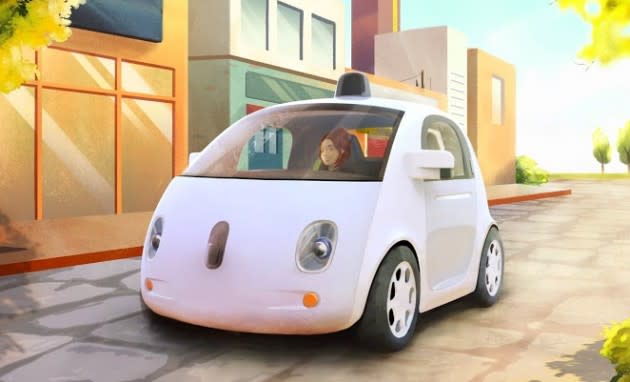 There's no doubt about it: for a company that makes most of its money from web ads, Google knows how to make an adorable self-driving car. The search giant's automotive prowess isn't going unnoticed by the industry's more established players, either. Mark Reuss, GM's executive VP of global product development, told recently told Bloomberg that he could see Google becoming a "serious competitive threat" in the motoring realm.

Yes, that seems like a "well, duh" confession to us too, especially now that Google will roll out at least 100 of those cutesy, two-seater prototype cars for some real world testing later this year. It certainly doesn't hurt that California's Department of Motor Vehicles just gave a thumbs up to self-driving car tests on public roads, a decision that'll take effect in September. Of course, Google can only become a competitive threat if it wants to be, and it's still unclear just how it plans to bring these motors to market. A separate Google Motors division? A slew of partnerships with existing manufacturers? Our crystal ball is on the fritz, and car crafters aren't quaking in their boots just yet. Reuss noted that "anybody can do anything with enough time and money" - Google's definitely got plenty of the latter, but major auto makers haven't just been sitting on their laurels. GM and Nissan both have self-driving car projects underway in China and Japan, respectively, while Volvo has been testing its own on the open roads of Sweden.

In this article: autonomous, cars, gm, google, selfdriving
All products recommended by Engadget are selected by our editorial team, independent of our parent company. Some of our stories include affiliate links. If you buy something through one of these links, we may earn an affiliate commission.