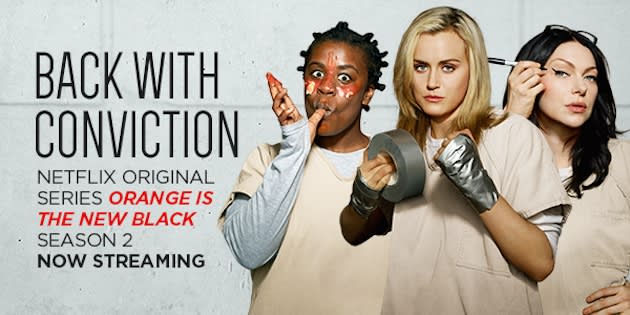 House of Cards is often recognized as Netflix's flagship original, but there's another award-winning show that's returning for a second season: Orange Is The New Black. Piper Chapman's prison-based predicament is back for another 13-episode sentence after we last saw her rearranging the face of another inmate. We already know that Laura Prepon won't return as a regular on the show, but Danielle Brooks (Taystee) and Taryn Manning (Pennsatucky) will, suggesting that our main protagonist showed some restraint in the first season's finale. Orange is now Netflix's most-viewed show (although the company doesn't share numbers) and chances are it will enjoy even more success this time around. The streaming giant has already ordered a third season, so go and binge-watch safe in the knowledge that it'll almost certainly return next year.

Via: Netflix UK
Source: Netflix
In this article: hdpostcross, netflix, OITNB, orange is the new black, streaming
All products recommended by Engadget are selected by our editorial team, independent of our parent company. Some of our stories include affiliate links. If you buy something through one of these links, we may earn an affiliate commission.