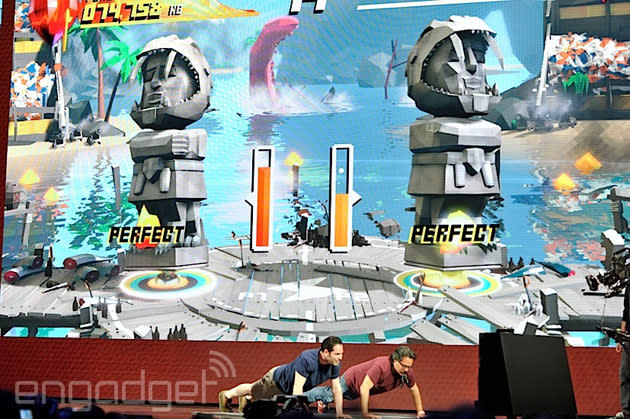 "Fitness is boring," says Ubisoft's Charles Huteau at the company's E3 press event. He's right, it is: There's a whole industry growing around our attempt to make exercise fun. Huteau, however, thinks the answer lies on the Xbox One. "Your workout will finally become an epic game." The name of that game is Shape Up, an Xbox One-exclusive fitness title that leverages Kinect 2.0's higher-resolution camera. It sounds old hat, we know -- but Huteau put his body where his mouth was, standing in front of the sensor and scanning his body into the game. He pulled up a mini-game called "Piano Step" and within moments, the presenter was competing against a pre-recorded version of himself in a modernized version of Dance Dance Revolution. The mini-game is brightly colored and musical, but asynchronous self-competition is just the first step. Huteau brought out a colleague, and the two immediately dropped to the floor, kicking off an impromptu push-up competition. On screen, the two presenters are pitted against each other in a Street Fighter-esque arena while the game stacks virtual weights (well, statues and trucks) on their back. It's hilarious and over the top, but it's also a good showcase of what developers can do with the new Kinect's lower latency. Of course, you'll have to buy Microsoft's more expensive Xbox One configuration to use it.

In this article: e3, e32014, fitness, kinect, microsoft, shapeup, ubisoft, xboxone
All products recommended by Engadget are selected by our editorial team, independent of our parent company. Some of our stories include affiliate links. If you buy something through one of these links, we may earn an affiliate commission.