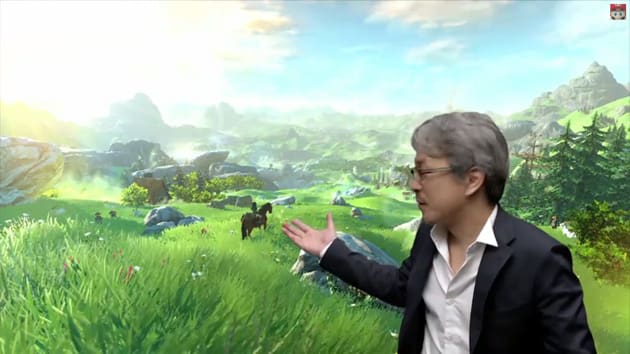 Last year, Zelda tastemaker Eiji Aonuma told us that he wanted to give players more freedom. "I want them to be able to explore more." Back then, he was talking about A Link Between Worlds; today Nintendo is talking about the franchise's first game designed natively for the Wii U. Taking the screen during Nintendo's Digital Event at E3, Aonuma showed a deep, lush landscape and pointed to the horizon. "You can even reach those mountains in the distance if you walk far enough." It's the first truly open-world Zelda game.

Aonuma says the new Zelda game is all about removing boundaries, recalling how the original Legend of Zelda allowed players to wander the land of Hyrule in any direction, almost without restriction. Exploration is the game's new focus, he says, and the first puzzle the player will have to solve is figuring out what direction they want to wander. Nintendo seems to be breaking a few sartorial conventions too: In a brief action clip, Aonuma showed a young, long-haired protagonist garbed in a light blue tunic, as opposed to Link's traditional green garb.

That adventure won't be available until some time next year, but there's still a Zelda game on deck for 2014: Hyrule Warriors, Nintendo's mash-up between The Legend of Zelda franchise and Dynasty Warriors. This game breaks a Zelda convention too, thanks to its partner franchise's multiplayer standards: Players will be able to team up as Link, Princess Zelda, Midna, Impa and possibly others. That experience can be had on September 26th, 2014.

In this article: e32014, nintendo, nintendodigitalevent, nintendodirect, nintendoe3, wii, wiiu
All products recommended by Engadget are selected by our editorial team, independent of our parent company. Some of our stories include affiliate links. If you buy something through one of these links, we may earn an affiliate commission.