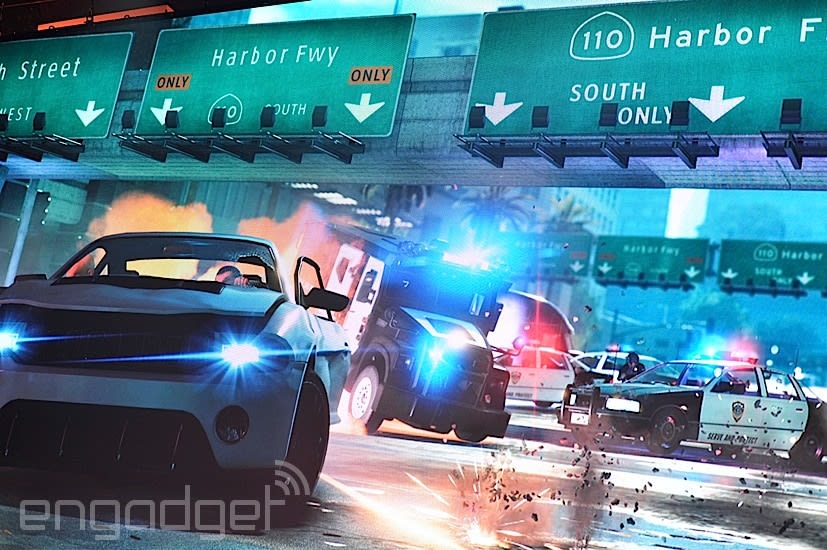 I stopped playing Battlefield this year. Why did I stop playing the massively popular first-person shooter? Because it never works when it launches. For those who haven't experienced the promise and defeat of a Battlefield launch, it goes as such:

Battlefield games come out every year. This was not always the case, but in the past four years, we've seen three Battlefield games. Zero of those three worked at launch (I actually wrote about this back when Battlefield 3 came out, at our sister site Joystiq). Battlefield 4 launched last October; it just started operating consistently. At E3 2014, EA announced this year's entry in the series: Battlefield Hardline. It's with this tremendous amount of baggage that I approached our interview with Battlefield studio head Karl Magnus Troedsson.

"You man up to the problems you've had, and you fix it."

Troedsson knows my plight well. Aside from having heard as much from me in the past, my issues with Battlefield are far from unique. One look at the Battlefield help site demonstrates how widespread the issues are. In so many words, he hears complaints about Battlefield 4 quite often these days. As such, he's prepared a characteristically positive response. Troedsson asks me, "I hear you. I hear you absolutely. But have you played Battlefield 4 lately?"

I haven't. After several months of major issues -- buggy gameplay, being kicked mid-game from online servers, unbalanced weapons, straight-up glitches -- I quit. And I'm not alone. Around 150,000 people are actively playing the game across five game platforms: Xbox 360, Xbox One, PlayStation 3, PlayStation 4 and PC. Estimates put sales of Battlefield 4 in the range of 7 million. It's pretty stark. How many of those folks will come back this holiday when the next game, Battlefield Hardline, launches?

Troedsson says the only thing he can do is be much more vocal with the community and create a great game. He says the studio culture has changed as a result of the last several years of botched launches. He says evidence already exists of that change.

"It's a cultural thing of how we engage with the community. It's a hardening experience to launch these kind of games, especially when we have challenges at the launch. The easiest way of going about something like that is becoming more closed off. As a company, as teams, it's basically a human reaction to something like this. We've decided to opt the other way -- to open up the kimono and say, 'You know what? You know why it's hard to make these games? Because it's very complicated.' That's not an excuse!"

Except that it is an excuse. And Troedsson knows it, because he said, "That's not an excuse!" before I could point out that customers who pay $60 for a broken product aren't assuaged when the product maker says, "Making this product is really tough." It absolutely is complicated making games, especially ones as sprawling as Battlefield 4. That, of course, doesn't excuse DICE from making a working product.

So, will Battlefield Hardline function when it comes out this year? I truly doubt it, but -- for what it's worth -- DICE is introducing a beta earlier than ever. Troedsson called it a "true beta." Keep in mind that the last several Battlefield games all had beta periods ahead of launch. What's a "true" beta, then? That remains unclear. It's not that I didn't ask, but this is what I was told when I did:

"The Battlefield 4 beta for instance; that was pretty close to the actual launch. That was more for the actual backend system. Because from that perspective, it is a true beta. The actual clients that people are playing on are very near final, but the backend is about doing the beta testing on those kind of systems."

Regardless, considering Battlefield 4 only just recently started working, why in the world is EA releasing another Battlefield game this year? It's hard to not see it as a naked cash-in on a franchise being milked for all it's worth. Troedsson defends EA's decision.

"We're shipping another Battlefield game a year after, which some people feel is too close. But there is a commitment here from us that we're gonna keep taking care of the products much more in a parallel way. People shouldn't think of this as a serial exercise of dropping games; as soon as one is dropped, the other one dies. Naturally, unless people really scream for it, we perhaps won't continue building a lot of paid DLC for BF4 after Hardline comes out, but will we still take care of the experience? Absolutely. If new problems occur, will we take care of them? Absolutely."

Here's the thing: Troedsson's missing the whole point. It's not just that fans who bought the past several games feel burned because they worry the game they bought will stop receiving support. The issue is that EA is asking them for money hardly a year after selling them a broken product. And the new product looks an awful lot like the broken one from last year.

Troedsson and I spoke for almost 20 minutes about mostly this. I've included the full audio below, which longtime Battlefield fans may be interested to hear. Troedsson is sympathetic to the plight of spurned fans, no doubt, and it's worth hearing his tone. Though I might not agree with all his answers, he's at least trying. Check it out for yourself below.

In this article: battlefield, battlefield4, battlefieldhardline, dice, e32014, ea, eadice, hdpostcross, interview, karlmagnustroedsson, pc, playstation4, ps4, xboxone
All products recommended by Engadget are selected by our editorial team, independent of our parent company. Some of our stories include affiliate links. If you buy something through one of these links, we may earn an affiliate commission.