Latest in Apple vs samsung tablets 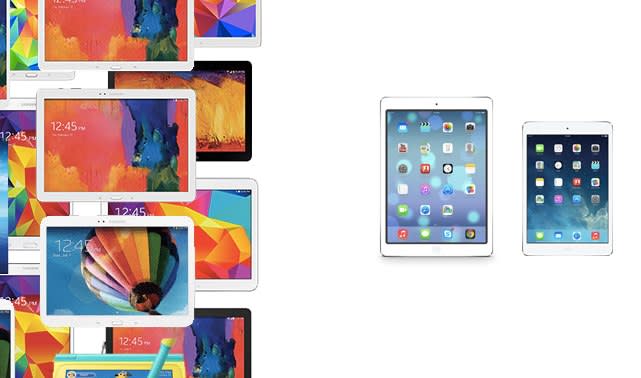 Having just launched a new pair of iPad competitors last week, Samsung's tablet arsenal seems to be growing at an exponential rate. To get a better idea of just how many weapons Samsung is stockpiling in its attempt to lure customers away from Apple's much more popular tablets, I gathered a list of all the Samsung tablets launched in the past 18 months. Here they are, compared to the tablets that Apple has launched in the same amount of time.

In case you're wondering, here's the list of Samsung tablets shown in the graphic.

This is compared to the iPad Air and 2nd generation iPad mini, which are the only two new tablets Apple launched over the same period.

So why isn't Samsung dominating Apple in tablet sales? Well, if I were in the market for a new tablet and was considering Samsung's hardware, my first question would be: How could anyone possibly choose?

In this article: apple vs samsung tablets, comparison, editorial, galaxy tab, ipad, samsung, samsung vs apple
All products recommended by Engadget are selected by our editorial team, independent of our parent company. Some of our stories include affiliate links. If you buy something through one of these links, we may earn an affiliate commission.