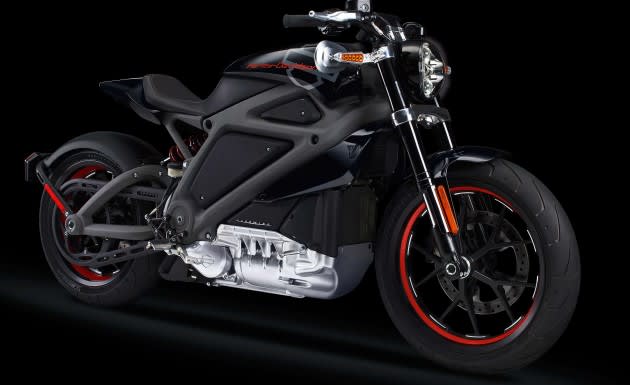 Legendary motorcycle builder Harley-Davidson teased an electric motorcycle with a video yesterday and now here it is. Project LiveWire is a part of Harley's attempt to expand its relevance beyond current riders and show off its new tech, with a not-in-production bike that it says is much more than just a trade-show prototype. Project LiveWire packs its electric motor into a polished case underneath the bike, and clearly the manufacturer is concerned about how customers may feel about losing signature touches like the V-twin engines and chrome pipes. The press release and video trailer promise "an unmistakeable new sound" like a jet on an aircraft carrier and tire shredding acceleration but don't have any specs to offer (according to Wired, the demo unit has 74hp, electrically limited 95mph top speed, 53 miles of range and charges in 3.5 hours). Built on a one-piece frame with dual-sided rear swing arm suspension, it has LED lighting all over and even a colorful touchscreen display for its rider. Of course, the best way to figure out if its customers want an electric motorcycle is to put them on one, and the company is doing just that with a demo tour this year.

Innovation, meet Heritage. Tell us what you think. #ProjectLiveWire http://t.co/oE3ik1383m

Fans will actually be able to ride the thing this year at any of 30 stops for "The Experience Tour" at Harley-Davidson dealerships along Route 66, or next year at other locations in the US, Canada and Europe. Even if you're not ready (or licensed) to take a motorcycle out on the road, it will have simulators for people to try out safely. The three stops announced so far include: New York June 24th- 25th, Boston 27th-29th and Philadelphia from July 17th - 19th. A few have already climbed on and report impressions that sound similar to our experiences with electric bikes like those from Zero Motorcycles and even Tesla's cars, with "amazing" torque and acceleration.

Source: Project Livewire, Harley-Davidson (1), (2)
Coverage: Autoblog, Wired, Cycleworld
In this article: electric, ev, harle, Harley-Davidson, HarleyDavidson, motorcycle, project livewire, projectlivewire, tour, video
All products recommended by Engadget are selected by our editorial team, independent of our parent company. Some of our stories include affiliate links. If you buy something through one of these links, we may earn an affiliate commission.