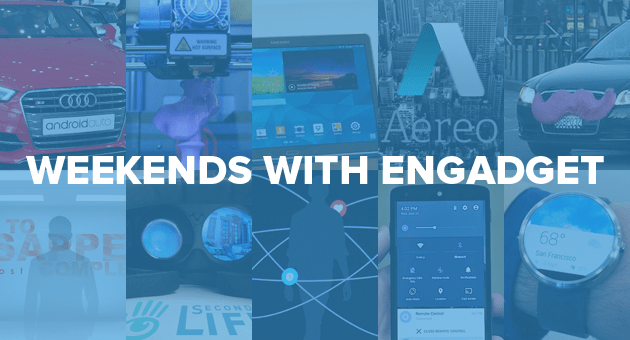 This week, we went hands-on with Google's Android L developer preview and Android wear, watched the US Supreme Court rule against Aereo, learned how to escape the clutches of the internet and more! Read on for Engadget's news highlights from the last seven days. Oh, and be sure to subscribe to our Flipboard magazine! Android L is just a developer preview for now, but it's a forthright indicator of the OS' uber-connected future. With over 5,000 APIs, a new set of guidelines called Material Design and 64-bit support, Google's provided a great education of its next mobile OS update. Aereo's been fighting an uphill battle for a while, but it looks like the final judgement has passed. This week, the US Supreme Court ruled that this live TV-streaming internet service was indeed illegal under copyright law. Most of us are probably familiar with Lyft and its furry pink mustaches, but there's much more to app-based car services than meets the eye. Read on as Steve Dent investigates the legal frustrations surrounding taxi-hailing apps and what they mean for you. Linden Labs, the studio behind Second Life, is preparing a sequel, and it's going to be a social network for virtual reality. Read on as Sean Buckley sits down with CEO Ebbe Altberg to discuss the game's evolution and collaboration with Oculus VR. You could toss your laptop, tablet and your phone, but is that enough to escape the clutches of the internet? Read on as Dan Cooper investigates the illusion of privacy in part one of How To Disappear. 3D printers: they're invading our workplaces, schools and homes, but what exactly are these DIY factories capable of? Read on as Jennifer Williams-Alvarez explores the world of 3D printing and what it means to you.

Android Wear is making waves this summer in the form of three new smartwatches: the LG G Watch, Samsung Gear Live and Motorola Moto 360. Read on for our breakdown of each wrist-worn device and its implementation of Google's wearable platform. Say hello to Samsung's latest slate, the Galaxy Tab S. Besides having a beautiful, crisp display and great battery life, this incredibly thin tablet matches the iPad Air nearly spec for spec. Available in 8- and 10-inch versions, the Tab S is up for pre-order at $400 and $500 respectively. Besides the smartwatch form-factor itself, what makes an Android Wear-powered device so important to Google's ecosystem? According to David Singleton, director of engineering, Wear is key to unlocking Android's full potential. Google gives us a simulated ride with Android Auto

This week at Google I/O, the Open Automotive Alliance announce Android Auto: a completely voice-enabled, contextually based system that projects your phone's OS and apps onto your vehicle's screen. What's more, its APIs are shared by Google's Android Wear platform.

In this article: aereo, androidauto, androidL, androidwear, google, twr, weekendswithengadget
All products recommended by Engadget are selected by our editorial team, independent of our parent company. Some of our stories include affiliate links. If you buy something through one of these links, we may earn an affiliate commission.