Blocks ends its modular smartwatch project after running out of money

One man built his own vacation spot in VR

The Blocks modular smartwatch will always be a concept 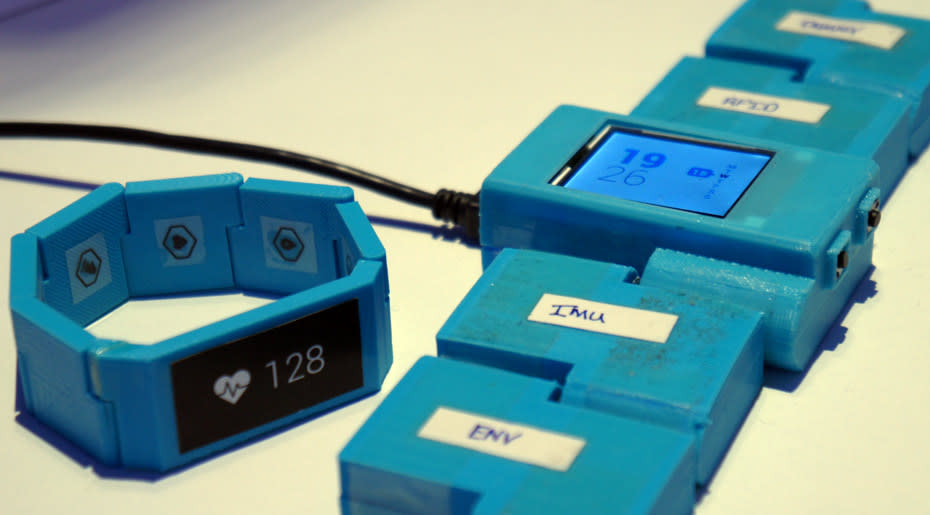 As one of the Blocks smartwatch team reminded us today, modularity has played an integral role in modern computing. A desktop PC is only a collection of components, after all, which can swapped out and upgraded based on what you need from that particular machine (a process Razer hopes to simplify with Project Christine). Recently, Google and others have been working out how to bring the same level of customization to the smartphone. With smartwatches and fitness trackers a burgeoning tech category, both in terms of consumer interest and product development, the Blocks team sees no reason why wrist-worn technology can't benefit from being modular, too. It's in the process of creating such a gadget and today we caught up with the team at a London event, hosted by the Bluetooth Special Interest Group, to talk about its progress and check out an extremely early prototype.

The puzzle of plastic above may not look like much (and it's far too big to be considered wearable), but it's been a successful proof-of-concept device. With it, the Blocks crew has confirmed its design is viable, in that all the components can communicate freely. It's now working on miniaturizing everything so it's wrist-friendly, though the finished product won't look anything like the colorful, 3D-printed mock-ups we saw today, or early renders Blocks has shared previously. Instead, it's going to have a more refined and premium appearance. Hopefully, something like:

It's easy to grasp the potential of a modular wearable like Blocks. If you wanted insane battery life, for example, you could turn the whole band into a secondary power source. Simple fitness tracking could be done by one link containing a gyroscope and accelerometer, while another housing a heart rate monitor and blood oxygen sensor could offer richer analyses. Similarly, outdoorsy types could pair a GPS module with one packing an altimeter, thermometer and barometer. Modules with SIM-card slots and cellular radios, RFID and NFC chips, cameras and microphones -- all useful features alone and in combinations. And then there's anything third-party module makers dream up.

Software is obviously a big part of the equation, and while a platform for Blocks was being developed in-house, the team is currently experimenting with Android Wear. The final call is far from made, however, as Wear immediately cuts iOS users from the potential customer pool. That's a pretty big deal when what you're building is, in most use cases, a smartphone-companion device. The company is also considering separate operating system modules, so Blocks hardware could run on various platforms.

One key benefit of Google's OS is support for different screen shapes. The plan is for Blocks to have several display options, including round, square and band-like faces, in OLED and e-ink variants (though stock Android Wear doesn't support the latter). These display modules will also run the rest of the show, each accommodating a processor and other necessities, a Bluetooth chip and the primary battery. Naturally, they'll be the most expensive. The Blocks crew has a lot to refine, but it hopes to be ready to seek crowdfunding this fall, with delivery well into the following year. A basic package with all the functionality of your standard smartwatch is expected to be $200-250/£150-200, and a premium tier with additional modules would be a little pricier at $300-350/£250-300 (bear in mind these are rough estimates). The concept itself is pretty sound, in the same way a modular smartphone looks to be a viable, albeit niche proposition. However, there's always the chance of thinking too big. Doing too much. Blocks is attempting to create a hardware platform from scratch, both building modules and hoping to attract others to do the same. Multiple face designs, display technologies and even operating systems complicate the situation further, not to mention the need for compatible apps and third-party developer support. Needless to say, it's an ambitious undertaking.

In this article: blocks, bluetoothsig, concept, CrowdFunding, FitnessTracker, hands-on, mobilepostcross, modular, smartwatch, uk-feature
All products recommended by Engadget are selected by our editorial team, independent of our parent company. Some of our stories include affiliate links. If you buy something through one of these links, we may earn an affiliate commission.