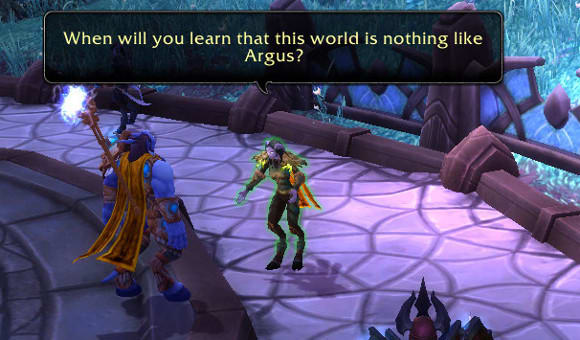 Warning - there will be spoilers for Warlords of Draenor in this post. Specifically for the Shadowmoon Valley zone.

One of the most fascinating things for me about the unfolding lore in this first zone is the new vision of the draenei it provides us. Far from the ragtag band of embittered survivors clinging on to a crashed dimension ship, the draenei of Warlords are a proud society of expatriated beings who are caught between conflicting impulses. Do they fight to hold on to the world they were forced to leave and its ancient ways, or do they adopt new ones to become more fully part of the world they find themselves on? And how many times have they had to make this choice?

As you quest through the zone, you come to discover that Shadowmoon Valley wasn't chosen as a draenei holy spot through random chance - the interaction between the draenei and the orcs in this area presages developments in other parts of the world. Just as the draenei have had to choose how they will adapt to a new world, the orcs of the Shadowmoon Clan were forced to contend with a power they did not understand. Each exists in a kind of opposition to the other, and the choices of one affect how the other develops. 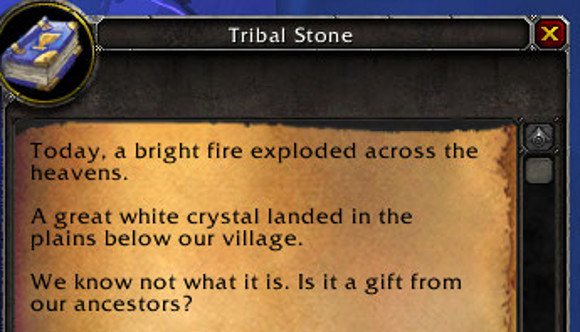 The arrival of the draenei to the world we know call Draenor after them is a known event, but that doesn't mean we know all there is to know about it. By the time we arrived on Outland, the great dimension-spanning ship that crashed in Nagrand, the diamond-vessel Oshu'gun, already been stripped of much of its identifying characteristics by Ethereal miners and places like Shadowmoon Valley and Farhalon were so utterly changed as to be unrecognizable. But with our trip to Draenor, we're learning details that we didn't previously know. One of them is that Oshu'gun's name was the Genedar, and during the vessel's crash, an occupant was ejected. Said occupant would have a potent effect on the orcs of the valley he crashed into.

We already know that the naaru D'ore was nearly killed during the crash. Velen laid the naaru to rest in the crypt at Auchindoun. What we didn't know was that while the Genedar plummeted to its crash landing, a piece of the craft would come down in the Shadowmoon Valley.

The Dark Star itself became an object of veneration at first. The orcs of the Shadowmoon Clan were confused by it - they were expert astronomers and mystics, but the Dark Star was a power unlike anything they'd ever seen.

What they did not do was ask their new draenei neighbors about it. They could have told them exactly what the Dark Star was, had they not had problems of their own to deal with.

This is not Argus

The draenei found the new world difficult to adapt to, in many ways because they refused to change their ways to suit it, trying instead to use their ancient magics and knowledge to adapt it to suit them. The result was a civilization forever divided between paths. Artificers and experts in the ancient crystal technologies of lost Argus would attempt to make use of such devices as had always worked to defend and benefit their people in the past, and yet, because of their unwillingness to understand the planet they found themselves on they couldn't predict the results.

This led them to conflict with the Rangari, a sect who embraced the new world they found themselves on. The rangari act as eyes and ears for the Prophet Velen, performing as a combined scout and intelligence force, but they achieve this aim by blending into the world they find themselves on - led by Exarch Naielle this force explores Draenor and takes the world not as they wish it to be, but as it is. As a result, they are opposed to any attempt to bend the world to suit techniques and technologies that were designed long ago, on a far, far away world.

So divided, the draenei of Shadowmoon Valley do not seem to have noticed that part of the Genedar crashed in orc lands. If they had, perhaps they could have aided their neighbors in coming to understand the true nature of the Dark Star. Instead, the Shadowmoon Clan came face to face with the power of the Void.

The Voice of Shadow

To put it succinctly - the Dark Star that fell upon Shadowmoon Valley was a naaru named K'ara. This entity, wounded as it was expelled from the crashing vessel, entered the void cycle of his people's personal Light/Void nature and it was this dark power that the orcs of the Shadowmoon Clan began to hear and make contact with. It's true that the Void is part of the existence of the Naaru, but the Shadowmoon orcs had no experience with it, and grew to fear what it was doing to them.

At some point in the past, they decided to put it behind them. Players exploring the Shadowmoon Valley will eventually come upon four tribal stones, left behind by the Shadowmoon before Ner'zhul led them to join the Iron Horde. 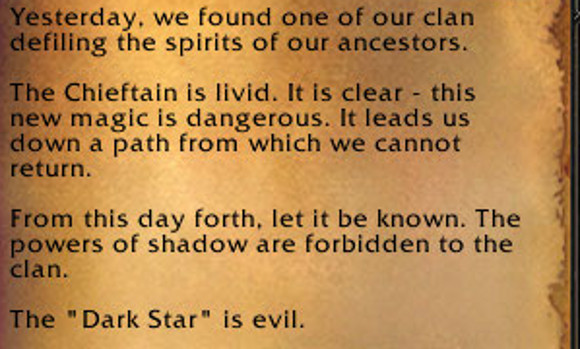 The Shadowmoon Clan didn't know that the Dark Star was essentially a wounded Naaru whose Void state bled out into the area, but it didn't matter - the Shadowmoon Clan was forbidden to use the Void magic, and that was to be the end of it.

Until the Iron Horde came. When Grommash Hellscream met with Ner'zhul, he offered him none of the respect one might expect for such a shaman, an elder even among the clans - instead, he offered Ner'zhul a choice. Either the Shadowmoon Clan could join the Iron Horde, or it could be destroyed. But perhaps goaded by an adviser, Grommash demanded even more of Ner'zhul. It wasn't enough that the Shadowmoon Clan submit to Grommash and his Iron Horde. No, they would have to do more. They would need to provide something that the Iron Horde didn't already have - a power great enough to justify the orc warlord's 'mercy' in sparing their clan.

So Ner'zhul did the unthinkable. He shattered his people's ancestral totem, the one that bound them to the will of their forebears, and he did that which they had expressly forbidden - he drew upon the awful power of the Void, the might of the Dark Star. 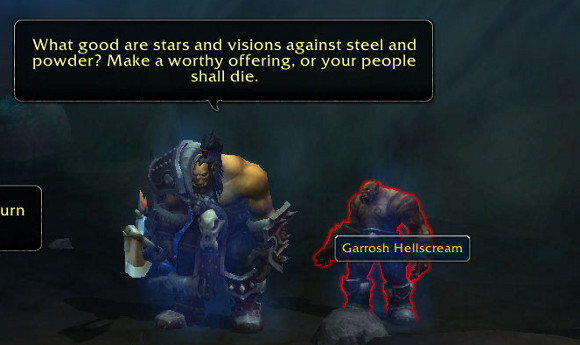 It should be pointed out that Ner'zhul had little choice in the matter - his options were join us or die, not join us or we'll be right put out with you. Not even join us or we'll definitely form a tight knit clique you won't be a part of. However, it doesn't change the fact that he did more than just tap into the power of the wounded Naaru - he did so by breaking his oath to his ancestors and shattering the ancestor totem. In essence, Ner'zhul willingly abandoned, he walked away from his ancestral ways to embrace this new power, no matter the consequences, because he saw no other path for the survival of his people.

This stands in strong contrast to his putative enemies, the draenei. Despite having arrived on Draenor at that moment - their vessel, the Genedar, was also the one that brought D'ore, K'ure and K'ara to the planet - the draenei have not managed to make this same choice as Ner'zhul. For them, there is no ancestral edict barring them from embracing new ideas. There is no clear and present danger to the very soul of their people. And yet, despite evidence that they need new ideas to survive on this new world, many of the draenei are unable to follow the path blazed by the rangari - are unable to change their ways to match Draenor.

As for what the ultimate outcome of Ner'zhul's embrace of the Dark Star is -- that would be telling, and while I'm willing to put out some spoilers, some things need to be seen to be understood.

While you don't need to have played the previous Warcraft games to enjoy World of Warcraft, a little history goes a long way toward making the game a lot more fun. Dig into even more of the lore and history behind the World of Warcraft in WoW Insider's Guide to Warcraft Lore.
In this article: Dore, featured, guide, guide-to-lore, Krar, Kure, lore, lore-guide, Nerzhul, Prophet-Velen, Rangari, role-play, role-playing-guide, rp-guide, Shadowmoon-Valley, world-of-warcraft-lore, wow-guide, wow-lore, wow-role-playing, wow-role-playing-guide, wow-rp, wow-rp-guide, wow-rping
All products recommended by Engadget are selected by our editorial team, independent of our parent company. Some of our stories include affiliate links. If you buy something through one of these links, we may earn an affiliate commission.