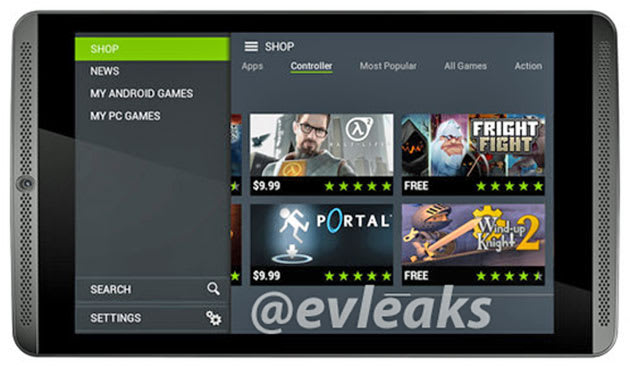 We've been hearing rumblings about NVIDIA's slate-style Shield successor, and now we have a face to go with the info. Thanks to noted leaker @evleaks, we're given a glimpse of the gaming tablet's front side. From the looks of it, speakers line the top and bottom (or left and right in landscape) of the display with what appears to be a front-facing camera as well. All told, the gunmetal gray color scheme drapes a design that resembles last year's Tegra Note. As far as internals go, previous rumblings point to 7.9-inch screen with 2GB of RAM and a quad-core Tegra K1 CPU, complete with Unreal Engine 4 abilities. What remains to be see is if that controller we got a peek at a while back is an accessory to wrangle traditional controls or if the new NVIDIA slate will also double as a home console for PC title streaming. We shouldn't' have to wait long for a proper introduction though, as the company has already hinted that the official reveal will happen before the end of 2014.

Source: @evleaks
In this article: android, gaming, nvidia, nvidiashieldtablet, shield, tablet
All products recommended by Engadget are selected by our editorial team, independent of our parent company. Some of our stories include affiliate links. If you buy something through one of these links, we may earn an affiliate commission.