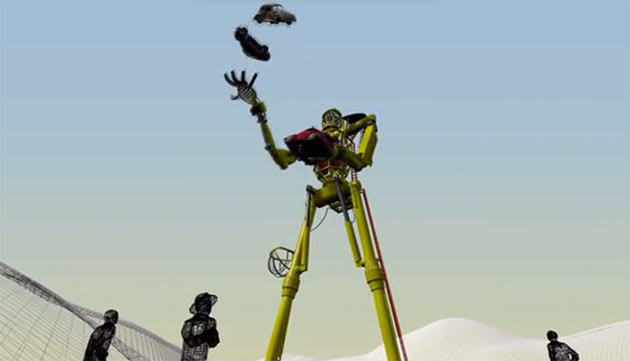 A robot that can juggle cars. And without any involvement from Michael Bay. That's the dream. Well, maybe it's just our dream, but a new Kickstarter project is trying to make it happen. It's (giant robot-sized) baby-steps to start with with: the initial prototype, costing $50,000, will only be juggling weights up to a 235lb (107kg) cannonball. This early model will use the same controls and hydraulic components as the car-juggling final model, just scaled down. The robot's interface is a wearable sleeve and glove, which will control the robot through user movement and provide haptic feedback, offering a "proportional force" when the robot catches heavy weights. If you want an idea of what Dan Granett's BugJuggler will eventually look like, there's a car-hurling render video right after the Kickstarter pitch -- both are right after the break. And if you're willing to stump up more than $5,000 you'll even get the chance to through cannonball hoops with the early prototype.

Via: Gizmodo
Source: BugJuggler (Kickstarter)
In this article: bugjuggler, car, car juggling, crowdfunding, juggling, kickstarter, robot, robots, video
All products recommended by Engadget are selected by our editorial team, independent of our parent company. Some of our stories include affiliate links. If you buy something through one of these links, we may earn an affiliate commission.