Huawei boosts smartphone sales in China by a whopping 66 percent

Xiaomi has been a significant contender in the phone world for a while, but it's now safe to say that the Chinese device maker has joined the big leagues. Canalys estimates that Xiaomi shipped more smartphones than Samsung in China during the second quarter of the year, making it the top vendor in its home country. Simply put, Xiaomi is a champ at making cheap yet desirable handsets -- its budget Redmi series has done a lot to boost sales, and even range-topping devices like the Mi3 (and now Mi4) are much more affordable than alternatives from the likes of Apple and Samsung.

The surge might have even been enough to make Xiaomi one of the biggest phone builders on the global stage. While IDC's data still doesn't include Xiaomi in the top five, Strategy Analytics believes that the company jumped into fourth place ahead of LG. Whichever study is on the mark, the data makes it easier to understand why Samsung's profit took such a big hit in the spring -- the Korean firm is up against at least one Chinese rival that's firing on all cylinders. 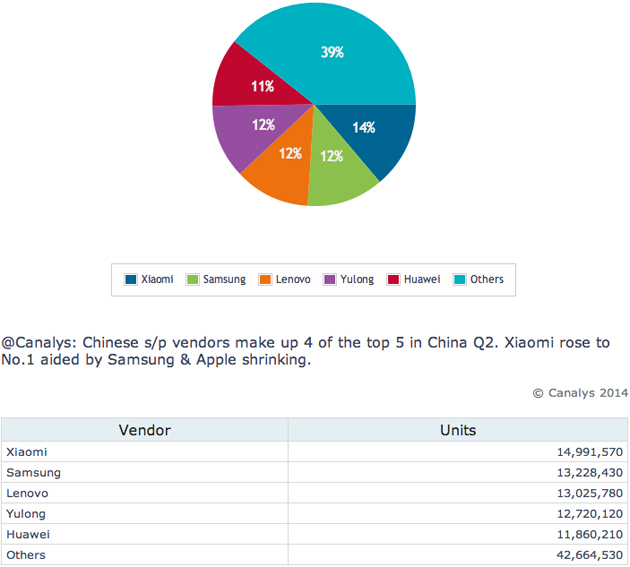 Via: Wall Street Journal
Source: Canalys
Coverage: Strategy Analytics
In this article: canalys, china, huawei, lenovo, marketshare, mobilepostcross, q22014, samsung, smartphone, xiaomi, yulong
All products recommended by Engadget are selected by our editorial team, independent of our parent company. Some of our stories include affiliate links. If you buy something through one of these links, we may earn an affiliate commission.