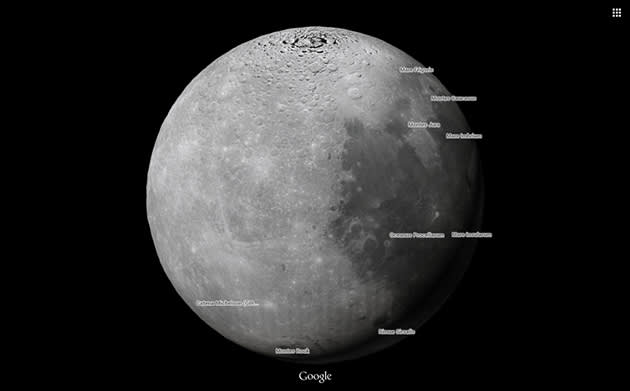 It'll be a long time (if ever) before someone sets foot on the moon again, but you can now go on a few lunar excursions of your own without leaving the comfort of Google Maps. Just pop into the 'Earth' view and keep zooming out -- once you've reached escape velocity and can see our little blue dot framed by stars, a tap on the 'Explore' button will proffer glimpses at the moon and our rusty celestial neighbor, Mars. Google added the heavenly bodies to commemorate the Curiosity rover's second year cruising the Martian surface, and while it isn't quite as flexible as Google Earth, Maps' new feature doesn't require any setup or forethought. There aren't any Street Views just yet, but there's still plenty of magnificent desolation to peek at after you're done plotting your course to the chiropractor.

Source: Google+
In this article: google, googlemaps, mars, moon, space
All products recommended by Engadget are selected by our editorial team, independent of our parent company. Some of our stories include affiliate links. If you buy something through one of these links, we may earn an affiliate commission.