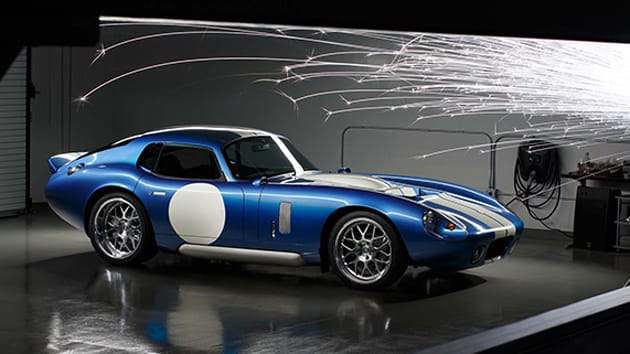 It's not hard to find electric supercars, but finding one that's truly American is a challenge. Even Detroit Electric's SP:01 borrows a British car body. Relief is in sight for patriotic EV buyers, however -- Renovo has just unveiled the Coupe, billed as the first "all-electric American supercar." It combines a Shelby CSX9000 chassis with eco-friendly guts, making it an odd blend of '60s-era sports car looks with modern responsibility. That still makes it a pretty fearsome beast. Its twin electric motors put out the equivalents of 500HP and 1000lb/ft of torque, which is enough to catapult it to 60MPH in 3.4 seconds -- that's quicker than most exotic gas guzzlers, and substantially faster than American performance EVs like the SP:01 and Tesla Roadster (both of which take "just" 3.7 seconds). It's quick to recharge, too, and can use a fast charger to top up in half an hour instead of the usual five.

There are some catches. The top speed is only listed as "over 120MPH," so you probably won't win any sustained drag races. There's no mention of range, either, so you might not want to count on any lengthy adventures. And that's if you can get a Coupe in the first place; the car doesn't go into its limited production run in 2015, and word has it that the price may be a lofty $529,000. Even if that's off, it makes Tesla's highest-end Model S sound like the bargain of the century. Nonetheless, the Coupe may be the only game in town if you want the fastest possible green machine made on American soil.

Via: Autoblog
Source: Renovo
In this article: car, coupe, electriccar, electricvehicle, ev, renovo, renovocoupe, shelby, sportscar, supercar, transportation, vehicle, video
All products recommended by Engadget are selected by our editorial team, independent of our parent company. Some of our stories include affiliate links. If you buy something through one of these links, we may earn an affiliate commission.