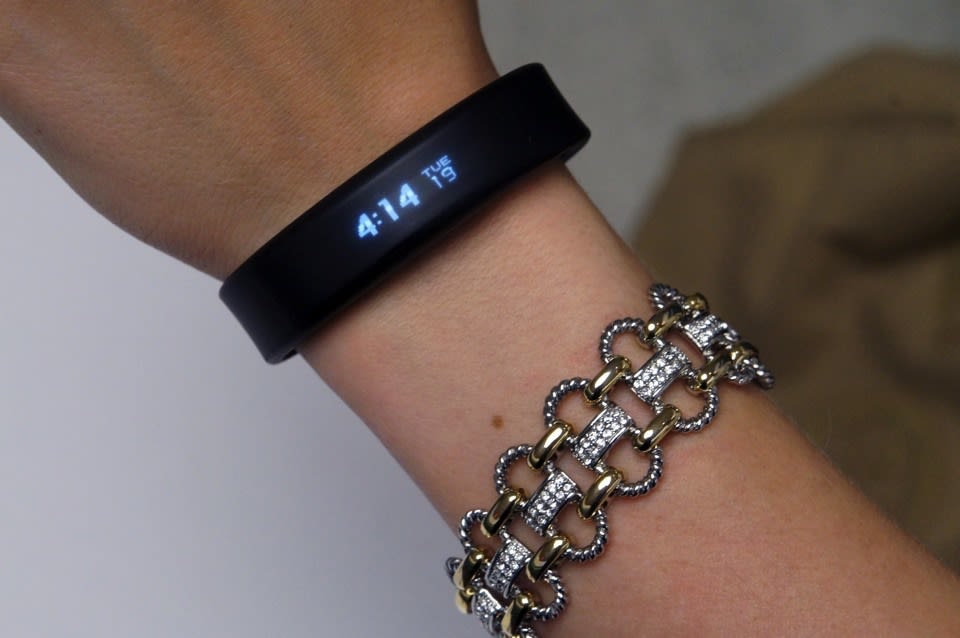 Considering how many damn smartwatches and fitness bands we've seen, it's incredible how few of them manage to combine aspects of both. Sure, there was the Fitbit Force, which was designed to show incoming calls for iPhones, but that was discontinued after a recall. The Samsung Gear Fit and Gear 2 have some fitness features, but you need a Samsung phone to use them, and besides, the step and heart-rate tracking aren't very accurate anyway. You might even remember the Razer Nabu, which won our People's Choice Awards at CES, and promised to display notifications for emails, among other things. But since that still hasn't come out, it's basically a moot point. All of this is to say: There's a wide-open market for fitness trackers that can also do the core job of smartwatches. Enter Garmin. The company just announced the $170 Vivosmart band, a fitness tracker that shows texts, emails, calls, calendar appointments, game notifications and music playback controls. For the time being, at least, it might be the most versatile fitness device you're going to find.

At first glance, the Vivosmart looks like the popular Nike FuelBand: A wide plastic bracelet (available in five colors), whose built-in OLED display stays hidden most of the time. When you want to swipe through your notifications, just double-tap the display to wake it up. Like any other fitness tracker, it counts your steps, calories burned, distance covered and the amount of time you spend sleeping each night. Also similar to other models, it has a vibration motor, which you can use to set wake-up alarms. It does food logging too, but only if you connect your existing MyFitnessPal account inside the Garmin Connect app, available for Android and iOS. As you might've guessed, the band is powered by a low-energy Bluetooth Smart radio, promising a fairly typical seven days of battery life.

That about covers the basics. Now let's get to the interesting stuff. For starters, the device is waterproof up to 50 meters -- a nice bonus, considering other models (including the FuelBand) are merely water-resistant. Additionally, the Vivosmart carries over some of the features we liked best on Garmin's other fitness trackers, including the flagship Vivofit and the Forerunner 15 running watch. First, there's the "move bar," a line that appears on the screen -- and that you have to work off -- whenever you've been inactive for an hour. It's a clever feature if only because it's less intrusive than a vibration or a beep. You can ignore either of those if you happen to be in a meeting, but the move bar -- that won't go away until you get up and walk. Like other Garmin devices, too, it's compatible with heart rate monitors and bike speed sensors, though you'll of course have to buy those separately.

The Vivosmart is available for pre-order today, with shipments expected to start mid-month. It's exclusive to Best Buy for now, but starting in November, you'll be able to find it in other stores as well. There's also a version that comes with a heart rate monitor. That costs $200. Hopefully, we'll get one in to review soon. Until there's a device that can do everything a fitness tracker and smartwatch can, we'll be curious to see if the Vivosmart does a better job as a smartwatch than smartwatches have as fitness trackers.

In this article: fitness, fitness tracker, FitnessTracker, garmin, garmin vivosmart, garminvivosmart, hands-on, ifa, ifa2014, vivosmart
All products recommended by Engadget are selected by our editorial team, independent of our parent company. Some of our stories include affiliate links. If you buy something through one of these links, we may earn an affiliate commission.