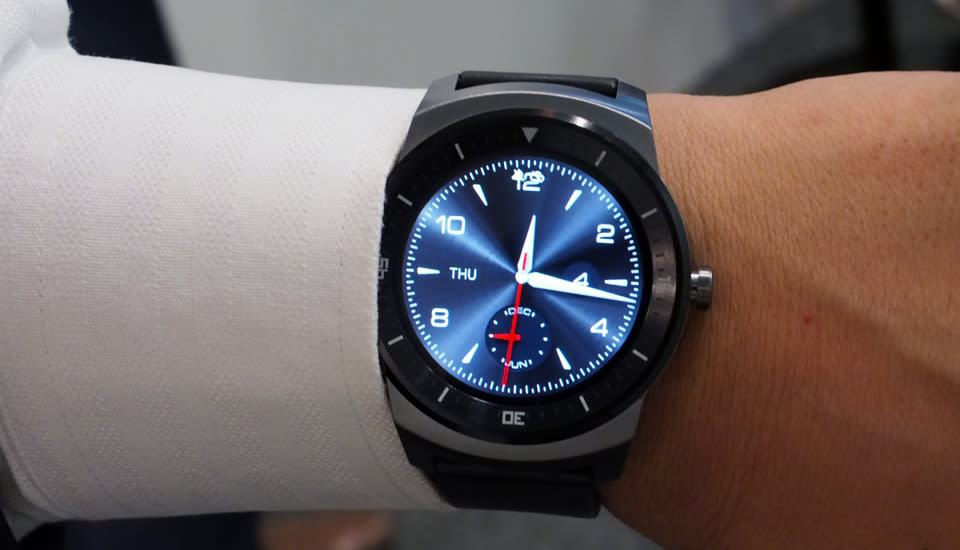 LG was one of the first out of the gate with an Android Wear smartwatch and, well, let's just say there was room for improvement. The original G Watch suffered from short battery life, a high price and a homely design. Now, just a few months later, LG is back with the G Watch R, the first smartwatch with a completely circular screen (read: no black strip at the bottom, like on the Moto 360). Unfortunately, the G Watch R doesn't correct all of the original's shortcomings -- it has a similar-sized battery, rated for up to two days, and an LG rep told us it will be more expensive. If nothing else, though, it's nicer to look at. In addition to that circular, 320 x 320 screen, it has a stainless steel chassis with a black calfskin band. In the beginning, at least, this will be the only wristband that LG offers, though if you wanted to, you could remove it and swap in any standard 22mm band, even one made by a third party (see the photo below for an example). At launch, too, the watch will only be available with matte black hardware, though LG also showed off a stainless steel version at a press event here at IFA.

All told, then, it's a more premium-feeling device than the original, which should at least partially explain the higher price. But is it nicer to look at? Depends on your personal preferences, of course, though I suspect a humongous watch like this will alienate a good number of people, high-end build quality be damned. Though the screen itself measures 1.3 inches, the watch itself has a diameter of 46.4mm (1.83 inches) from edge to edge, making this a massive piece of hardware. Though LG insists this isn't a men's watch, per se, I can't imagine many women buying this. (To be fair, I think most smartwatches were not designed with women in mind.) Even then, it takes a certain kind of man to wear something so aggressively masculine. But who knows? Maybe there's a good deal of overlap between early adopters who spend their money on flashy gadgets and dudes with disposable income who like flashy watches. Actually, that sounds about right! Inside, there's a heart rate monitor as well as a 410mAh battery, a small step up from the 400mAh cell used in the original G Watch. You'll unfortunately need to charge it every day, as you would your smartphone. To do this, you'll use a charging cradle, which you attach to the charging pins on the underside of the device. One thing you won't find in the watch: an ambient light sensor. That's actually the downside to having a perfectly circular display; the Moto 360 has a "flat tire" on the bottom of the screen, but that panel is also home to some important sensors. Namely, the ambient light sensor. In any case, no ambient light sensor means the display brightness will stay fixed unless you manually change it, which certainly won't do your battery life any favors.

Other than that, it's a nice display, at least at first glance. The 320 x 320 resolution is a step up from the 280 x 280 resolution we groused about on the original. As you can imagine, it was bright enough to view indoors, but that was never the problem: Is it readable outside? That's the sort of question we'll need to revisit later, when we get to take one home. LG has said that the watch will go on sale sometime early in the fourth quarter, so I'm placing my bets on October, maybe November. It will ship with Android Wear 1.0, but will be eligible for the next version of Google's smartwatch OS, whenever that becomes available. We'll be back, as ever, with a full review. Until then, enjoy the hands-on photos.

In this article: android wear, androidwear, g watch r, GWatchR, hands-on, ifa, ifa2014, lg, LG G Watch R, lggwatchr, smartwatch, video
All products recommended by Engadget are selected by our editorial team, independent of our parent company. Some of our stories include affiliate links. If you buy something through one of these links, we may earn an affiliate commission.