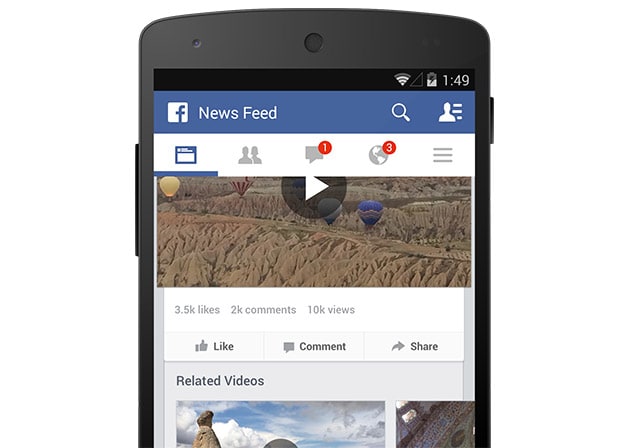 Though it's still far from YouTube, Facebook fired a shot across its competitor's bow by saying it now serves up a billion native video views per day. In addition, its latest update (rolling out soon) has a YouTube-like view counter for public videos, making it easier to find popular selections or see how your own uploads are doing. Facebook said two-thirds of video views were from mobile devices, a stat no doubt helped significantly by the new auto-playing feature that's on by default. A recent video ranking change also gives frequent video watchers more options. But as the NY Times pointed out, Facebook's social nature can also send a video viral quickly. Beyoncé, for instance, garnered 2.4 million Facebook pageviews for a VMA video in four hours, while YouTube only chalked up a few thousand in the same time. Facebook also touted improved metrics for publishers, and is clearly interested in generating more video revenue -- it recently purchased a video ad firm called LiveRail.

Via: TechCrunch
Source: Facebook
In this article: facebook, Facebook Video, mobilepostcross, video
All products recommended by Engadget are selected by our editorial team, independent of our parent company. Some of our stories include affiliate links. If you buy something through one of these links, we may earn an affiliate commission.