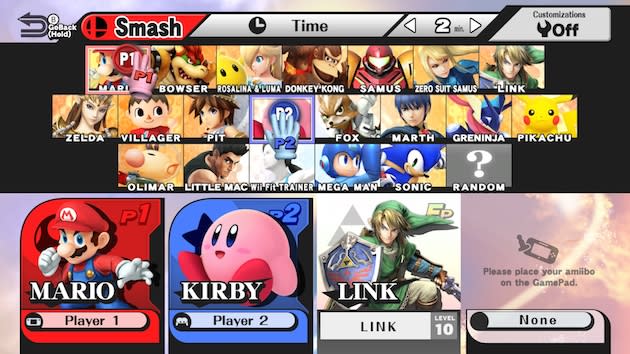 If you need another method of controlling Super Smash Bros whenever it actually releases for Wii U, Nintendo apparently has you covered. Spotted by a Japanese gamer on Twitter and IGN (the handheld version is already out in the East), the 3DS version offers the option to connect the portable to Nintendo's HD console to exchange customized characters. What's more, there's a menu saying that you "can use it as a controller," too -- perfect for any future couch-based tournaments, we'd imagine. Granted, you'll almost assuredly have to own the game on both platforms for this to happen, but what Nintendo fan wouldn't anyway? We've reached out to Nintendo for confirmation on the matter and will update this post should we hear back.

Am I crazy, or does this say that if you connect your 3DS with your Wii U, that you can use your 3DS as a controller? pic.twitter.com/Cg4G7cjSYL

The text on the top screen says "connect your 3DS with your Wii U to exchange customized characters, and you can use it as a controller."

In this article: 3ds, 3dsXl, gaming, hd, hdpostcross, nintendo, SuperSmashBros, WiiU
All products recommended by Engadget are selected by our editorial team, independent of our parent company. Some of our stories include affiliate links. If you buy something through one of these links, we may earn an affiliate commission.