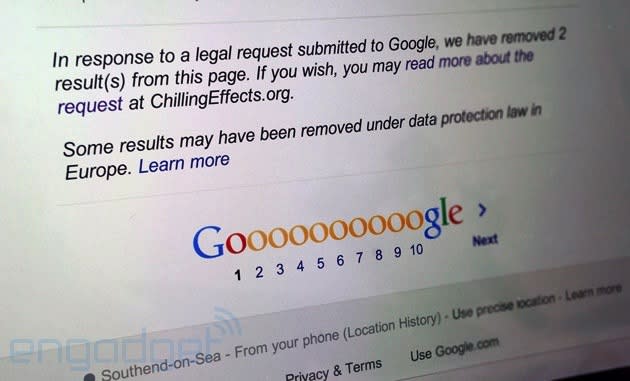 Ever since Google announced that it's complying with the European Commission's "right to be forgotten" ruling, it's been inundated with requests to take down all sorts of search results. Many of those sought to bury negative reviews or write-ups, but in this particular case, the search result Google took down was neither negative nor damaging. In fact, it used to lead to a five-year-old article published on Worcester News, which called the piece's subject (an artist by the name of Dan Roach) "excellent" and "very talented." That's right -- you can apparently ask Google to remove anything from its results pages in the European Union, even if it's not dangerous or offensive... and maybe even if it's helpful to some people. Worcester News editor Peter John was so dismayed by what happened, that he called it "the most absurd and silly piece of censorship" when he talked to The Guardian.

If you're wondering, it was likely Roach himself who asked the tech giant to remove a link to an article that describes him as a brilliant artist, based on the statement he gave Worcester News. Roach, who's now fully experiencing the Streisand effect, said: "The decision to ask for the link to be removed from Google was based on no more than a wish to highlight my new work, rather than the old." John, however, couldn't help but question why the request was granted.

He told The Guardian:

An artist wanting to remove part of his back catalogue did not strike us as the sort of principle that the European court of justice had in mind when it came up with the right to be forgotten ruling. Would Google remove early Hirsts or Monets on request?

To be fair, Google itself was opposed to the EU Commission's ruling from the start, but it had no choice but to comply.

In this article: google, RightToBeForgotten
All products recommended by Engadget are selected by our editorial team, independent of our parent company. Some of our stories include affiliate links. If you buy something through one of these links, we may earn an affiliate commission.