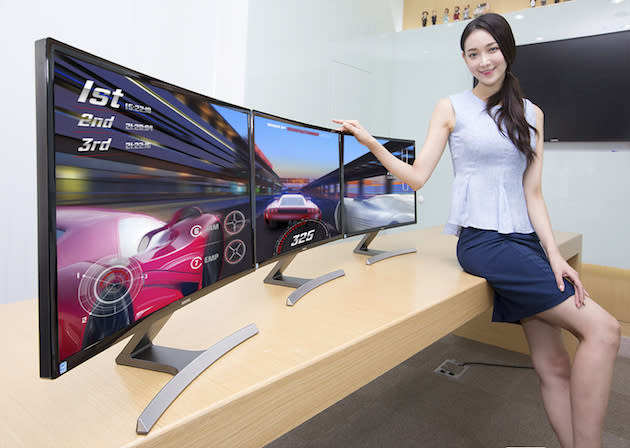 Want a curved display from Samsung but don't quite have the scratch to bring one of its gigantic models home? Maybe try the 27-inch S27D590C monitor on for size when it releases at some ambiguous point in the future. The firm seems to be targeting gamers specifically with the monitor, saying that the curve creates a wider field of view (178 degrees horizontally and vertically, if you're curious) and gives the screen a "3D-like" effect when you're playing shooters and racing games, among other genres. There's even a one-button game mode that makes a few adjustments to compensate for motion blur, color and contrast too. Unlike Dell's not-flat display, however, this one's limited to a paltry 1,920 x 1,080 lines of resolution and a 16:9 aspect ratio. This'll probably be fine for us commoners, sure, but it might not be enough for the PC Master Race.

Update: Samsung's curved monitor will be hitting shelves on October 1st for $430. 5
In this article: CurvedDisplay, gaming, hd, hdpostcross, monitor, PcGaming, samsung
All products recommended by Engadget are selected by our editorial team, independent of our parent company. Some of our stories include affiliate links. If you buy something through one of these links, we may earn an affiliate commission.