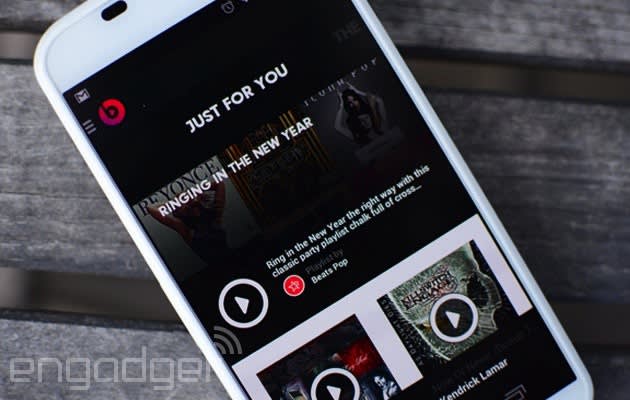 Whatever Apple has in the works for its future audio offerings, it may not include keeping Beats Music in app stores. TechCrunch reports that Apple plans to shut down the music streaming service, noting that CEO Ian Rogers has already been tasked with running iTunes Radio. The move wouldn't be a huge shock as it makes sense for Tim Cook and Co. to bring new listening options under the iTunes umbrella rather than keeping Dr. Dre's young moniker. It also goes to show that in addition to nabbing the hoards of faithful headphone wearers, Apple's purchase was just as much about getting the talent behind the brand's full line of products -- including Dre and Jimmy Iovine -- under its wing. I reached out to Beats for comment, and I'll be sure to update if it offers any additional information. Of course, we're interested to see how "the first subscription service that finally got it right," according to Cook, will get molded into a new audio option.

Update: Well, Apple's Tom Neumayr told Re/code that the TechCrunch report is simply not true. But that doesn't mean there won't be changes to Beats Music. The service may stay, but the Beats Music brand may disappear. And that makes perfect sense when the iTunes brand is already so strong.

Source: TechCrunch
In this article: apple, beastmusic, beats, music, musicstreaming, streaming
All products recommended by Engadget are selected by our editorial team, independent of our parent company. Some of our stories include affiliate links. If you buy something through one of these links, we may earn an affiliate commission.