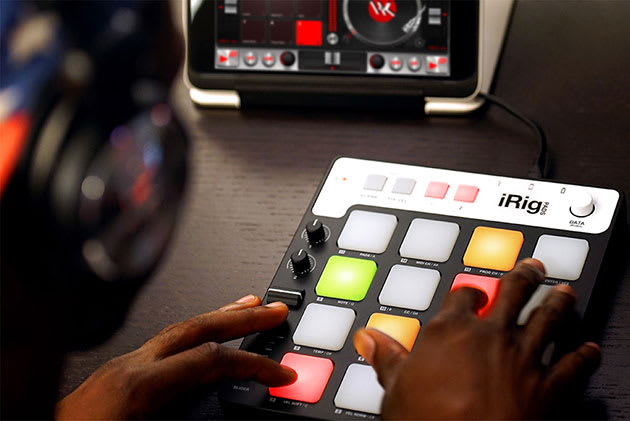 It's no secret that we're fans of handy audio gear here at Engadget, and if you're looking to kick off that DJ habit, IK Multimedia may have a compact option for you. The company's new iRig Pads brings a 4 x 4 grid of multihued touchpads (as the name suggests) for MIDI control of iOS, Mac and PC apps. Those 16 rubber pads are also pressure sensitive while flashing red, green and orange. What's more, a smattering of buttons and a slider are programmable to handle custom presets alongside onboard edit controls. At less than an inch thick, the outfit says it's the smallest of its kind available at the moment, and it grabs power from whatever device it's tethered to via either a Lightning or USB cable. As you might expect, this latest iRig offering plays nice with IK Multimedia's suite of audio apps (SampleTank, DJ Rig, etc.) as well as popular MIDI-friendly options like Ableton Live, GarageBand and more. If you're itchin' to start composing those trance grooves, the gadget is now shipping worldwide with a $150/€120 price tag.

13
Source: IK Multimedia
In this article: audio, dj, ios, mac, midi, midicontroller, pc
All products recommended by Engadget are selected by our editorial team, independent of our parent company. Some of our stories include affiliate links. If you buy something through one of these links, we may earn an affiliate commission.