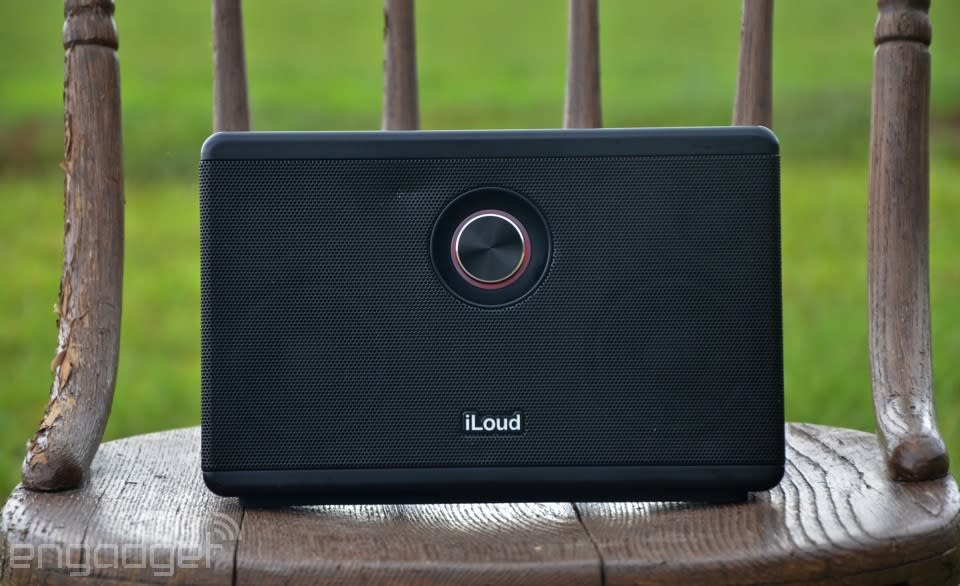 I've secretly desired a portable Bluetooth speaker for a while now, particularly the Beats Pill. But the problem was (and still is) that I can't justify adding yet another wireless music streaming option to my relatively small abode, which is already outfitted with an Apple TV and Pioneer SX-218. Sure, a Bluetooth speaker is handy for the occasional barbecue cookout on your front porch. But any other time, I'd rather just pop in a pair of 'buds and get the entire stereo effect. However, being the fan of IK Multimedia's Apple-centric iRig line that I am, I bit the bullet and opted for the iLoud.

As a portable Bluetooth speaker, the iLoud has served me well. I have no trouble pairing it with my MacBook Pro, iPhone 5 or HTC One. Once I'm about 20 feet away from the unit, however, the audio suffers minor yet distinct dropouts. Not too bad, really. As far as build goes, the iLoud is wonderful on the road. Mine found a daily home in the bottom compartment of a Mercedes-Benz Sprinter for 18,000 miles of (mostly) horrible road conditions. Nonetheless, it emerged with only minor scratches to the exterior -- it helps that the drivers are hidden behind a hefty black metal grille.

All told, the iLoud drives 40 watts of total audio force through two 2 x 3-inch woofers and two 2 x 3/4-inch tweeters, all in a package about the size of a large paperback novel. Now, watts don't directly translate to decibels. But in comparison, that's as much electrical force as a Fender Hot Rod Deluxe III tube amp, which holds its own in any small-to-medium-sized venue. I can't crank the iLoud all the way up within the confines of my home without my ears feeling seriously uncomfortable. And there's surprisingly little distortion at such insane levels. The top end is crisp and tight (as is the nature of small speakers), and the bassy synth swells in Ellie Goulding's "Hanging On" and "Figure 8" are fantastically beefy. I've actually used the iLoud as an extra stage monitor during performances of my own by routing my personal mix to its 3.5mm input jack. Crazy, right?

On its backside there's an additional quarter-inch analog input jack for an guitar or mic. The extra circuit allows me to plug in both my guitar and iPhone, pull up IK's AmpliTube app and start jamming. Having an actual speaker makes it much easier to mess around with new AmpliTube presets or jam alongside your favorite tunes than with a regular iRig interface and the mess of cables alongside it.

Obviously, the iLoud is geared toward the musician or GarageBand artist rather than passive listeners. But for $300, the iLoud brings me extra features and much more sound than an equivalently priced Beats Pill XL.

In this article: engadgetirl, IK Multimedia, IkMultimedia, iLoud, irl
All products recommended by Engadget are selected by our editorial team, independent of our parent company. Some of our stories include affiliate links. If you buy something through one of these links, we may earn an affiliate commission.