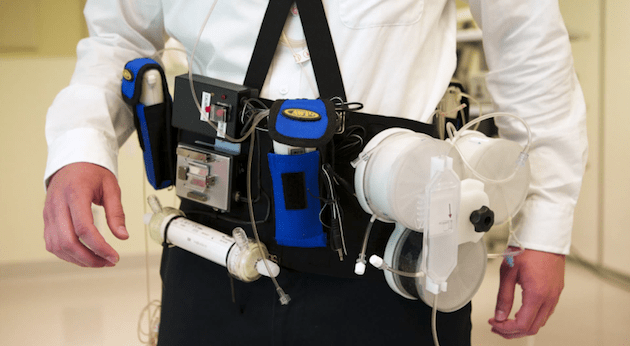 As neat as your smartwatch is, there are other existing wearables which, you know, can actually make the world a world a better place -- though that's not to say whatever you have on your wrist now is useless and for pure vanity purposes. Aptly named the Wearable Artificial Kidney, a projected started back in 2008, this medical gadget hopes to make the dialysis process better for patients, thanks in particular to its portability features. As opposed to the more traditional, stationary machines found at hospitals or in homes, which tend to be extremely heavy, the current version of WAK weighs a mere 10 lbs (around 4.5 kg.) and can be attached around a person's waist.

The real advantage of the Wearable Artificial Kidney, according to the people behind it, is that it would allow patients to mobilize while still being treated, giving them chance to go to places such as work or school. After multiple tests overseas, Dr. Victor Gura and researchers from UCLA are set to run their first clinical trial here in the US later this year, which will bring it one step closer to becoming a commercial product. Once that's done, it will be up to the Food and Drug Administration to determine if it can give it a seal of approval.

In this article: Artificial Kidney, Artificial Organs, Dialysis, FDA, food and drug administration, Kidney, Organs, Wearable Artificial Kidney
All products recommended by Engadget are selected by our editorial team, independent of our parent company. Some of our stories include affiliate links. If you buy something through one of these links, we may earn an affiliate commission.