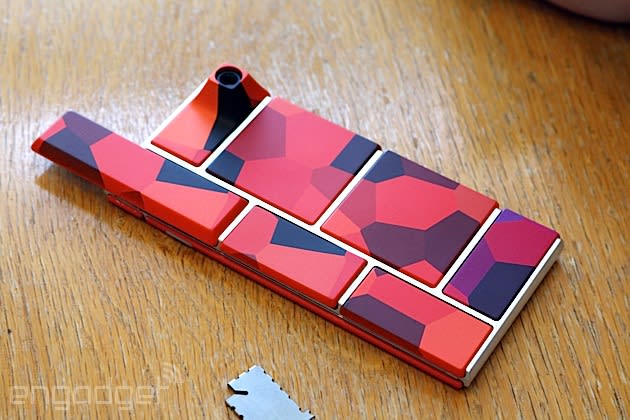 Back in April, Project Ara's Module Developers Kit revealed that the phone's battery will be hot-swappable; in other words, you can replace it without having to switch the phone off. Nifty trick, right? Well, the feature's apparently not limited to the device's battery. Project director Paul Eremenko has recently divulged in a keynote that you'll be able to swap the phone's other modules around, save for the CPU and display, even if you're in the middle of typing out a message or of a phone call. You've got the modified version of Android L that the team developed with non-profit org Linaro to thank for that, as it was the key ingredient Team Ara needed to make most of the phone's components hot-swappable.

Say you're taking pictures of friends when you suddenly remember that you have a module equipped with a better camera -- you can presumably just switch the two right then and there while your friends are in mid-pose. Other than that, Eremenko has also revealed that Google plans to build an online store that sells different types of modules (think Google Play, but for Ara parts), so ready your wallets if customizing phones are your thing.

Via: Phonebloks
Source: YouTube
In this article: androidl, google, mobilepostcross, ProjectAra
All products recommended by Engadget are selected by our editorial team, independent of our parent company. Some of our stories include affiliate links. If you buy something through one of these links, we may earn an affiliate commission.