Will.i.am's Puls wristband has its own 3G, support from AT&T 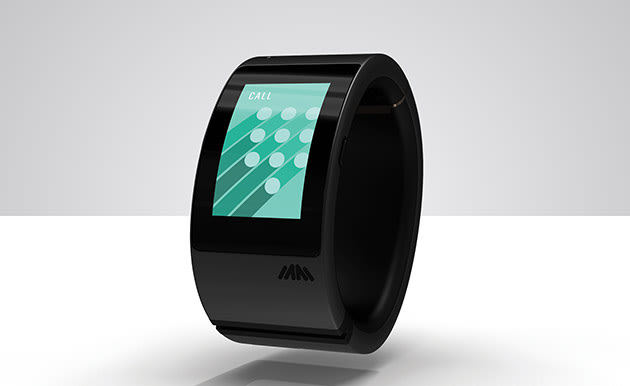 Will.i.am has just revealed the Puls at Dreamforce 2014, a smartwatch that doesn't need to be tethered to a phone to send texts, emails or make and take phone calls. In fact, Will kept saying it's not a watch, because smartwatches don't typically come with SIM cards, which the Puls does have, along with speakers and a touchscreen display that curves along with its body, making the device look more like a cuff than a traditional watch. The Puls (a product out of his wearable tech company, i.am+) has 16GB of storage onboard, 1GB of RAM, GPS, a battery that goes around the bracelet, pedometer and accelerometer, all powered by an Android-based platform and a Qualcomm Snapdragon processor. It connects to the internet not only via WiFi, but also via 3G, which means it has carrier partners: the Puls works with AT&T in the US and O2 in the UK.

As we've mentioned in the past, the watch comes with a music streaming service baked into it. It also has a voice assistant (another Siri rival, if you will) that can remind you to call people or of an event, wake you up, among other tasks similar programs can do, as well as a fitness app that monitors your workouts. Other than the watch itself, Will.i.am and his team have also designed accessories to go it: a jacket with battery packs that can charge the Puls so long as it touches the sleeve (each jacket can provide two-and-a-half days of power), a backpack with speakers, and shoes that weigh you and tells you how many steps you've taken in a day. The musician/entrepreneur didn't mention how much the Puls and its accessories will cost, but the wristband itself will be available this holiday season in select AT&T stores.

Source: Puls, TechCrunch
Coverage: TechCrunch
In this article: i.am, i.amPuls, Puls, SmartWatch, will.i.am
All products recommended by Engadget are selected by our editorial team, independent of our parent company. Some of our stories include affiliate links. If you buy something through one of these links, we may earn an affiliate commission.