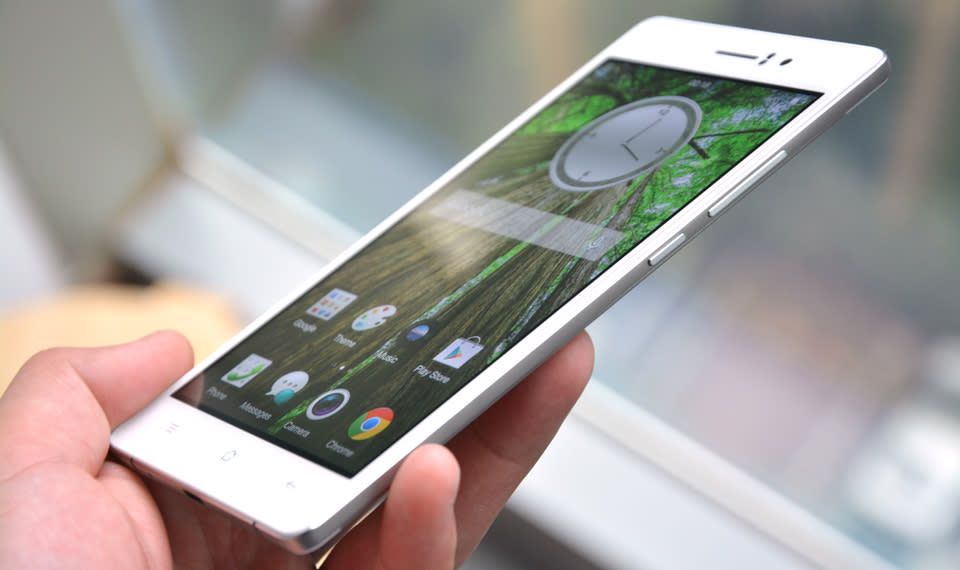 Step aside, Gionee, as your record for the world's slimmest smartphone has just been beaten by a fellow Chinese manufacturer. Oppo's R5, the successor to the Asia-only R3, comes in at just 4.85mm thick, thus beating the 5.15mm-thick Elife S5.1 from Gionee. Despite the crazy thin metallic body, the R5 still packs a handful of goodies: a 5.2-inch full HD AMOLED screen, an octa-core (quad 2.1GHz and quad 1.5GHz), 64-bit Snapdragon 615 SoC, 2GB of RAM, 5MP/13MP cameras (both with f/2.0 aperture), LTE radio and a 2,000 mAh battery. All of this comes in at just 155g heavy. Of course, there's bound to be a trade-off: You only get 16GB of internal storage, no microSD expansion and, unlike the Elife S5.1, no 3.5mm headphone connector here -- you'll need to use the bundled micro-USB adapter or Bluetooth (there's an optional O-Music Bluetooth clip for your headphones and for triggering the camera). Build quality and body strength aren't an issue on the pre-production unit we played with in Shenzhen. The metallic frame is nicely chamfered and manually polished to give a comfortable grip. What's more, while most slim phones are known to expose more heat to the surface, the R5 uses a phase-shifting material -- as featured on modern PC motherboards -- to help cool the internal components; but we'll need to properly test the phone to see if this works as well as it claims. If we must pick a fault at this stage, it'd be the main camera module that sticks out a little on the back, which can be forgiven for the sake of maintaining image quality. Much like the N3 announced alongside it, the R5 comes with Color OS 2.0 (based on Android 4.4) which packs some handy features plus a few new ones. For one, the old gesture panel can now be toggled by dragging up from the Home button, thus letting you draw customized gestures to launch apps or open contacts. By default, you can draw a "V" to turn on the flashlight, draw a circle to launch the camera, or draw a "W" to launch WeChat.

As for the new camera app, you get a greater freedom of customization by installing your desired features as plug-ins: "HD Picture" (to make super detailed 64-megapixel images), "Slow Shutter," "Beautify," "Professional," "Super Macro," "GIF mode" and more. These are also featured on the N3, naturally. Another common feature shared between the R5 and the N3 is the VOOC rapid charging. Using the bundled charger, the 2,000 mAh cell can go from zero to well above 75 percent in just half an hour, though the exact charging time is yet to be determined. We should know soon, anyway, as the R5 is slated for the global market this December, and it'll come in silver, gold and grey with an off-contract price of $499.

In this article: china, coloros, coloros2.0, hands-on, mobilepostcross, oppo, oppo r5, oppor5, phone, r5, video
All products recommended by Engadget are selected by our editorial team, independent of our parent company. Some of our stories include affiliate links. If you buy something through one of these links, we may earn an affiliate commission.