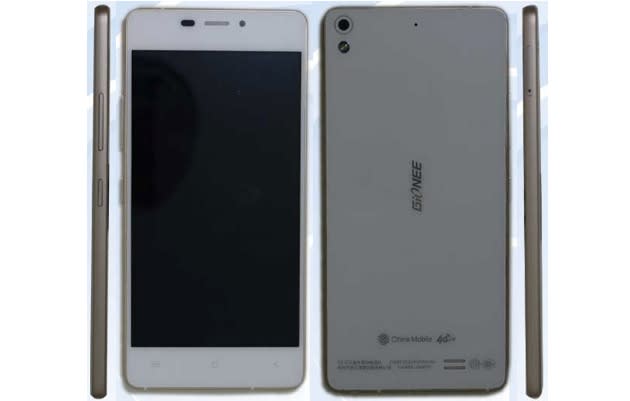 If you thought Gionee's Elife S5.5 was ridiculously thin, you'd better hold on to your hat. China has certified an upcoming Android handset from the company, codenamed the GN9005, that reportedly measures 5mm (0.2in) thick; that's half a millimeter less than the wafer-like Elife S5.5, and possibly the thinnest smartphone to date. You will be giving up some bells and whistles in the name of a super-slim profile, mind you. This device will have a strictly middling 4.8-inch 720p AMOLED screen, a slow quad-core 1.2GHz processor and a modest 2,050mAh battery. The 1GB of RAM, 16GB of storage, 8-megapixel rear camera and 5-megapixel front shooter won't impress, either. Still, Gionee will get to claim some serious bragging rights -- at least, so long as it's not upstaged between now and the GN9005's launch.

Update: The device -- officially dubbed the Elife S5.1 -- is actually 5.15mm thick. Not that the 0.15mm would make much difference, anyway.

In this article: android, china, elifes5.1, gionee, gn9005, mobilepostcross, s5.1, smartphone, tenaa
All products recommended by Engadget are selected by our editorial team, independent of our parent company. Some of our stories include affiliate links. If you buy something through one of these links, we may earn an affiliate commission.