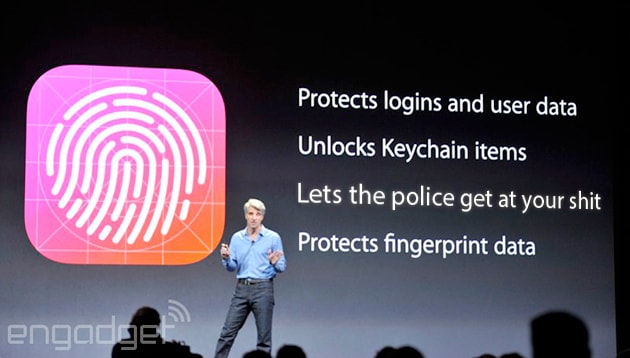 Here's some trivia for your next trip to the pub. Did you know that, in Virginia, you don't have to tell the cops your phone's unlock code, but you're obliged to open it if you use a fingerprint based passcode? It's a quirky piece of legal precedent that's just been established in the state after a key piece of legal evidence was believed to be trapped on the defendant's smartphone. According to The Virginian-Pilot, the court ruled that the fifth amendment's provisions against self-incrimination protect against giving up your passcode, but that since a fingerprint is already taken by the police - same as DNA or handwriting samples - it's fair game. Naturally, this is just one circuit court judgment in one state, but we imagine this is the sort of thing winding up at the supreme court in a few years time.

Via: Techmeme (Twitter)
Source: Hampton Roads
In this article: apple, Court, Crime, Fifth Amendment, Fingerprint, Law, Passcode, Police, Privacy, samsung, Security
All products recommended by Engadget are selected by our editorial team, independent of our parent company. Some of our stories include affiliate links. If you buy something through one of these links, we may earn an affiliate commission.