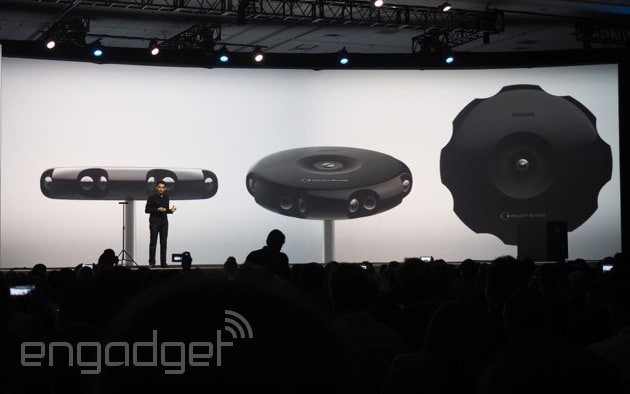 Samsung has just unveiled a sneak preview of a new camera called Project Beyond, which is a 3D-capturing 360-degree camera designed to capture videos and stream them on the Gear VR. Pranav Mistry, Samsung's VP of Research, says that Beyond is a "new kind of camera that gives a new kind of immersive experience." The camera (which apparently houses 16 full HD cameras) shows a 360-degree panoramic view and captures everything in 3D, collecting a gigapixel of 3D data every second. It promises high-speed connectivity, adaptive stitching, ultra wide-angle optics and stereoscopic depth. And, this isn't just a concept. It's actually a fully working device. This, Mistry says, is really important for Gear VR, as you can feel as if you're "literally there." You can also have it set up so that every Gear VR user that's connected will be able to see the video stream, with "no lag whatsoever." Samsung says that it's "the world's first true 3D 360 degree camera" and captures and streams "omniview videos in stunning high-resolution 3D." We're still finding out more about this, but until then, here's the product page for more info.

Update: We had the opportunity to have a look at the Beyond camera up close and personal (though we weren't allowed to take pictures of it), and found out a little more information about it. For one thing, it's designed to be static. So you'd set it up on a tripod of some sort, and let it capture the visuals around it. This isn't meant to be a GoPro replacement at all. Additionally, the company is still super secretive about who it's for and how much it'll cost. I asked if it was meant for filmmakers or consumers, and wasn't given a straight answer. All I was told was that it's a "top secret."

It seems that Project Beyond isn't the final product, but an example of what Samsung is working on to create three-dimensional worlds for the Gear VR. For example, you could create an immersive collective viewing experience of a live concert or a sporting event. Indeed, the Project Beyond page describes it as allowing users to "instantly teleport to places and events they always wanted to see."

Speaking of which, while I wasn't able to try the Beyond camera, I did get a look at some of the videos it recorded at various points in the San Francisco Bay Area. After donning the Gear VR, I had a glimpse of the ocean as recorded from a dock near Pigeon Point Light Station, a lighthouse located 50 miles south of the city. I could look up, down and all around me, as if I was standing on the dock.

The 3D video did give me a tiny bit of a headache as I turned around in a circle, and I was surprised at how grainy and pixilated the video was -- the combination of the two took me out of a supposedly immersive experience. It's a reminder that this is still very much in beta, and I imagine the quality will be tweaked over time. We're told that although the Beyond camera won't be available to the public any time soon, the content that it has generated "will be available to every Gear VR user immediately."

In this article: samsung, sdc, sdc2014
All products recommended by Engadget are selected by our editorial team, independent of our parent company. Some of our stories include affiliate links. If you buy something through one of these links, we may earn an affiliate commission.