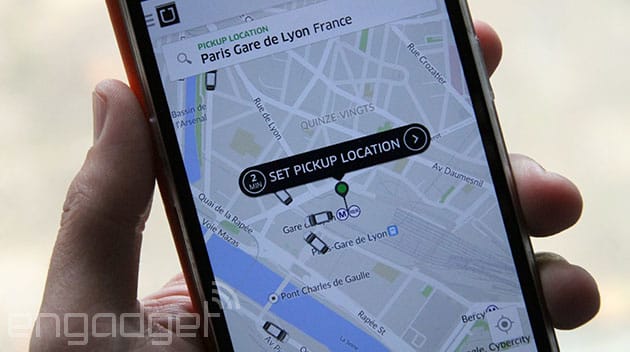 Uber has more explaining to do following a report that one of its employees tracked a Buzzfeed reporter's location without her permission. Earlier this month, reporter Johana Bhuiyan was greeted by Uber's New York general manager Josh Mohrer, who pointed at his phone and told her "There you are. I was tracking you." The same reporter said that Mohrer previously sent her logs of her Uber trips -- in both cases, without permission. That's a clear violation of Uber's privacy policy, which it posted yesterday following another firestorm over executive Emil Michael's statement that the company should investigate journalists.

In a move to quell the previous furor, CEO Travis Kalanick tweeted a series of apologies yesterday, saying "Emil's comments... were terrible and do not represent the company." However, Mohrer later posted a tweet with a #HatersGonneHate hashtag and photo of NY employees "shaking off" the criticism, which was quickly deleted. Two ex-Uber employees told Buzzfeed that the "God View" app is widely available to corporate employees (not drivers), though neither said they saw unauthorized use of it.

As spotted by the Washington Post's Philip Bump (above), Uber's God View tracker even has a "Dr. Evil" mascot image, an internal joke that doesn't seem so funny now (it's since been pulled). The company has also been criticized for misusing the tracking system before, in particular by venture capitalist Peter Sims who wrote about it on Medium. He said that party-goers at Uber's Chicago launch were watching his (and other known people's) progress in Uber vehicles, much to his disgust.

Uber is already under fire in cities like Toronto and even its home base of San Francisco. Its own policy states that the God View can only be used by the company for "legitimate business purposes," and not for spying on riders. If it can't enforce its own rules in a privacy-sensitive age, however, we imagine that local regulators -- many of whom distrust the service already -- would be happy to step in.

Source: Buzzfeed, Uber
In this article: GodView, investigation, privacy, tracking, Uber
All products recommended by Engadget are selected by our editorial team, independent of our parent company. Some of our stories include affiliate links. If you buy something through one of these links, we may earn an affiliate commission.