Sinclair C5 gets a modern reboot as the IRIS eTrike 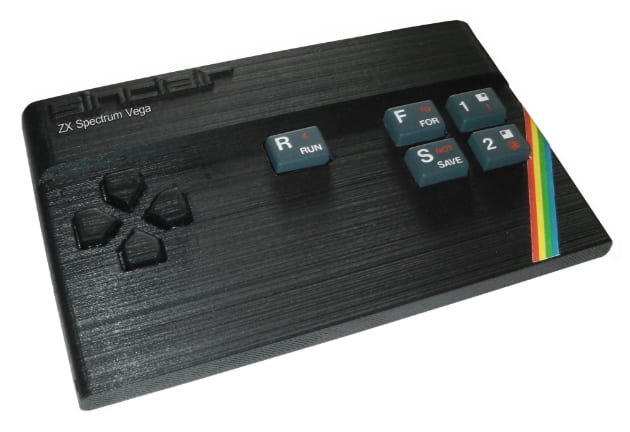 The ZX Spectrum was a landmark computer in the 1980s that gave Britain classic video games such as Elite, R-Type and Manic Miner. Now it's coming back as the Sinclair Spectrum Vega, an all-in-one controller and console that's styled after the original, but uses modern advancements to make it sleeker and cheaper. The new model has been put together by Retro Computers, a startup backed by Sinclair Research, the company founded by ZX Spectrum inventor Sir Clive Sinclair. A working prototype has been completed and now the team is pitching on Indiegogo to get the first 1,000 consoles in production.

The most striking difference between the original ZX Spectrum and the Sinclair Spectrum Vega is the latter's buttons, or lack thereof. The all-in-one controller features a D-pad, four face buttons (F, S, 1 and 2) and a dedicated reset option. Retro Computers says it'll come with 1,000 games pre-installed and support additional Spectrum titles loaded from an SD card. In addition, the company plans to release more free games post-launch, and is talking with rights owners about a combined software royalty donation for the Great Ormond Street Hospital for Children charity. Retro Computers is hoping to raise £100,000 ($157,115 USD) from its Indiegogo campaign and backers can claim one of the first 1,000 consoles by pledging £100 ($157 USD) or more. While it won't play the latest Call of Duty, Halo and Madden titles, we suspect you wouldn't be interested even if it did.

Via: Eurogamer
Source: Indiegogo
In this article: clive sinclair, Retro, video games, zx spectrum
All products recommended by Engadget are selected by our editorial team, independent of our parent company. Some of our stories include affiliate links. If you buy something through one of these links, we may earn an affiliate commission.