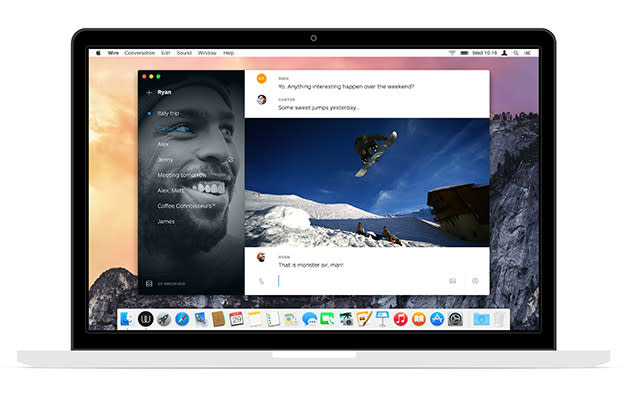 Skype co-founder Janus Friis thinks the 11-year-old program's a liiittle outdated, that's why he now backs and advises its newest rival called Wire. "A lot has changed since then -- we are all used to free calls and texting, and we have taken to carrying our computers in our pockets," he said. The app, according to the Germany- and Switzerland-based startup that created it, can take advantage of newer devices' (such as the iPhone 6's) large displays and capabilities. According to TechCrunch, it also boasts a number of under-the-hood improvements, including better file compression, even if it looks vastly simpler than Skype.

It has one of the most minimalist interfaces we've seen, in fact -- so much so, that we had a tough time getting used to the Mac client's controls and figuring out how to switch accounts. Navigating the mobile app felt more natural and entailed mostly swiping and pulling to access different screens. Nevertheless, either version allows you to upload your own pictures to use as background, as well as add friends straight from your contact list. At the moment, Wire is capable of supporting pictures/GIFs/audio and other media in (one-on-one or group) text chats, making voice calls to and from WebRTC-compatible browsers (Chrome, Firefox and Opera), and even playing YouTube or SoundCloud files from within the chat window through embedded players. Unfortunately, it still can't replace your favorite chat app, as it can't make real-time video calls just yet. But the company promises to add that feature, among many others, in the future.

In addition to Friis himself, the startup is comprised of other employees who've once worked for major tech companies. CEO Jonathan Christensen was, himself, from Microsoft's MSN Messenger team, and many other employees came from the Skype team or corporations like Apple. If you want to give Wire a shot despite that Facebook Messenger, Line, Whatsapp, Hangouts, or any other messaging app on your phone, head over to its website for the download links. Since it's available for iOS, Android and Mac, it comes with the capability to sync messages across devices -- we just hope it doesn't usually crash as often as it did when we tried to register for an account.

In this article: android, app, chat, ios, mobilepostcross, osx, skype, wire
All products recommended by Engadget are selected by our editorial team, independent of our parent company. Some of our stories include affiliate links. If you buy something through one of these links, we may earn an affiliate commission.