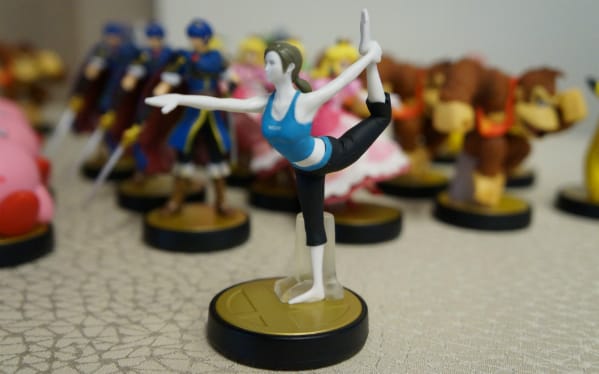 Nintendo of America confirmed this week some Amiibo toys "likely will not return to market," following a retailer's claim that the publisher had officially discontinued the Marth, Wii Fit Trainer and Villager figures. In a statement provided to several sites including Wired, Kotaku and Destructoid, Nintendo said it'll aim to keep the "most popular" figures available, but that there's only so much shelf space to go around.

"We will aim for certain Amiibo to always be available," reads the statement. "These will be for our most popular characters like Mario and Link. Due to shelf space constraints, other figures likely will not return to the market once they have sold through their initial shipment." Canadian retailer VideoGamesPlus raised eyebrows when it tweeted on December 6 that Nintendo had discontinued a trio of the launch wave of Amiiibos. Marth, Wii Fit Trainer and Villager were 3 of the 12 Skylanders-like toys that launched alongside Super Smash Bros. in North America a little more than two weeks ago.

A Nintendo representative told Wired the comapny wouldn't specify any further details as to which Amiibo figures would be phased out and which ones would stay available.
After its first tweet, VideoGamesPlus then added "Nintendo has also officially discontinued the GameCube adapter." The device, which went on sale alongside Smash, allows users to plug in up to four GameCube or WaveBird pads to work with the Wii U game (and only that game).

However, as Nintendo Life reported, supply dried up soon after launch. At the time of writing, Amazon, GameStop, and Best Buy don't have the item in stock. Instead, Amazon's third-party sellers are offering it at a minimum price of $100, compared to its suggested tag of $20.
With regards to the adapter, Nintendo told Wired the company had no comment.
Source: Wired, Kotaku, Destructoid
In this article: amiibo, discontinued, gamecube, gamecube-adapter, gamecube-controller, marth, nintendo, north-america, stock, super-smash-bros-for-wii-u, villager, wii-fit-trainer, wii-u
All products recommended by Engadget are selected by our editorial team, independent of our parent company. Some of our stories include affiliate links. If you buy something through one of these links, we may earn an affiliate commission.