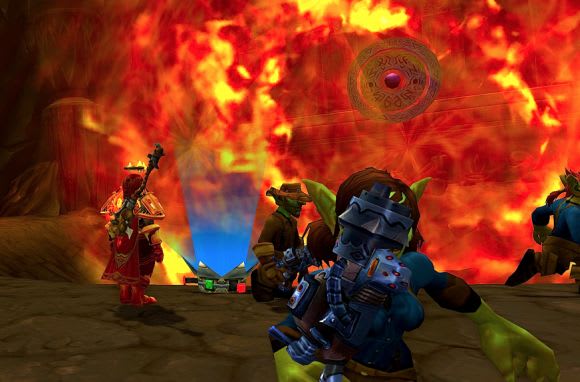 Okay, tanks and healers, let's be up front about something: we own LFD.

This came to mind while reading these posts on the forums about tanks queuing up for a dungeon solely to get the early quest item, then dropping the group as soon as they had it, forcing the group to wait to replace them. Tanks can do this because we have instant queues - if you want to tank a dungeon, all you have to do is queue up and you're in almost immediately. Healers sometimes have a bit of a wait, but usually not much of one, and can often have instant queues as well.

DPS? Well, DPS players (the most popular role, so we know it's somewhat self-inflicted) have to wait. On average, they have to wait up to an hour to get into a heroic. So if you're a DPS player queuing up for a heroic, it can be immensely frustrating to finally get that group you've wanted, zone in, help the tank kill the mobs he or she needs to get to that quest item, and then the tank drops the group, at the very least setting you back a half hour if not outright dooming your dungeon run. You did your part - you helped clear to the quest objective. And your reward is more delay.

Rygarius mentions that a solution is in the works (it's now live), that the end boss' death will be an objective of the quests, and I think it's a solid workaround. And the reaction of some players to this workaround is revealing in a way I find disturbing.

One of the arguments you can see in that thread is that there's already a penalty for dropping group without completing the dungeon - the debuff that keeps you from queuing again. I find this a bit disingenuous - if you are the kind of person who deliberately takes the tank or healer role knowing you're going to drop the group before they've pulled a single boss once you've gotten your quest item, clearly you're not terribly interested in running dungeons in and of themselves, so why is a short break (especially in Warlords, where there are Garrisons to occupy you) a penalty? You didn't want to be there in the first place, you were just exploiting other players to accomplish your goals without helping them accomplish theirs.

It's that mentality that strikes at the heart of group play. When one agrees to play a role in a dungeon, be it as a tank, a healer or as DPS, a minimum standard of cooperation should be the goal. Yes, you should be free to leave if its necessary - you have life obligations, the other players are being abusive, your cat felt like unplugging your power strip would be hilarious - but I think it's fair that if you're not willing to work with a group to complete an objective, you shouldn't get to complete that objective.

As someone who has tanked a lot over the years, one of the syndromes that can be caused by tanking is "I'm the king of this dungeon", a mentality where you start to think that because your role is singular and important to proceed that you are inherently more important. This is foolish. You're playing a game. So is everyone else in the dungeon. You are all people playing a game together. If your approach to playing Monopoly was to play until you got a specific property than to stand and upend the board, no one would want to play with you, and you wouldn't defend that behavior (unless you were kind of a jerk, I guess) so acting surprised or offended that players don't like being walked all over in a dungeon group isn't honest.

I'm not arguing that all tanks do this, or that there aren't terrible DPS players who do all this and worse. I'm just saying that we need to preserve group cooperation, and if that means tanks or healers have to actually finish a dungeon to finish a quest in that dungeon, I'm okay with it.

In this article: dungeons, healers, lfd, looking-for-dungeon, quests, tanking, tanks
All products recommended by Engadget are selected by our editorial team, independent of our parent company. Some of our stories include affiliate links. If you buy something through one of these links, we may earn an affiliate commission.