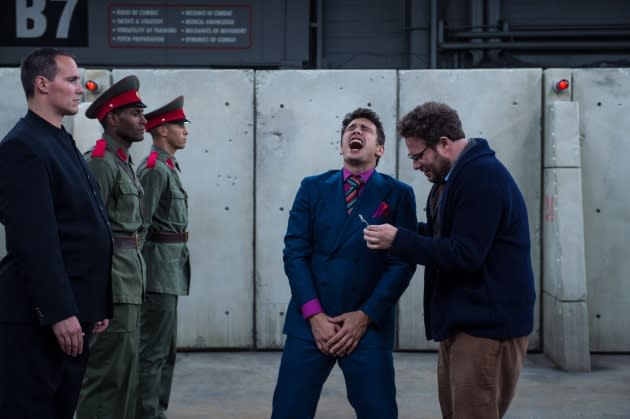 Threats posted by the people behind the unprecedented hacking of Sony Pictures appear to have had the desired effect. The Wall Street Journal and The Hollywood Reporter both state, based on anonymous sources, that the largest movie chains will not debut the movie next week. Carmike Cinemas said that it would not be showing the film, while the sources indicate they will be joined by AMC, Cinemark, Regal and Cineplex. In a statement to THR, Regal cited Sony Pictures' 'wavering support' for the film, as well as the threats, as the reason it decided to delay the film's opening. According to Variety, one possibility is to release the movie straight to video on-demand, but so far Sony Pictures has not commented publicly.

Update: According to CNN's Pamela Brown, Sony Pictures has pulled the plug and will not premiere The Interview on December 25th as it originally planned. In a statement (included after the break), the company said "In light of the decision by the majority of our exhibitors not to show the film The Interview, we have decided not to move forward with the planned December 25 theatrical release." Meanwhile, another movie set in North Korea starring Steve Carell that was about to go into production has been cancelled.

Update 2: According to media reports, the US government will publicly identify North Korea as the source of the cyberattacks.

Update 3: According to the LA Times, Sony Pictures says it currently has no plans to release The Interview in any form, including straight to DVD/Blu-ray, VOD or subscription streaming.

In light of the decision by the majority of our exhibitors not to show the film The Interview, we have decided not to move forward with the planned December 25 theatrical release. We respect and understand our partners' decision and, of course, completely share their paramount interest in the safety of employees and theater-goers.

Sony Pictures has been the victim of an unprecedented criminal assault against our employees, our customers, and our business. Those who attacked us stole our intellectual property, private emails, and sensitive and proprietary material, and sought to destroy our spirit and our morale – all apparently to thwart the release of a movie they did not like. We are deeply saddened at this brazen effort to suppress the distribution of a movie, and in the process do damage to our company, our employees, and the American public. We stand by our filmmakers and their right to free expression and are extremely disappointed by this outcome.

Source: The Hollywood Reporter, Wall Street Journal, Deadline, Variety, LA Times
In this article: CyberAttack, GOP, korea, Sony, Sony Pictures, SonyPictures, the interview, theinterview
All products recommended by Engadget are selected by our editorial team, independent of our parent company. Some of our stories include affiliate links. If you buy something through one of these links, we may earn an affiliate commission.