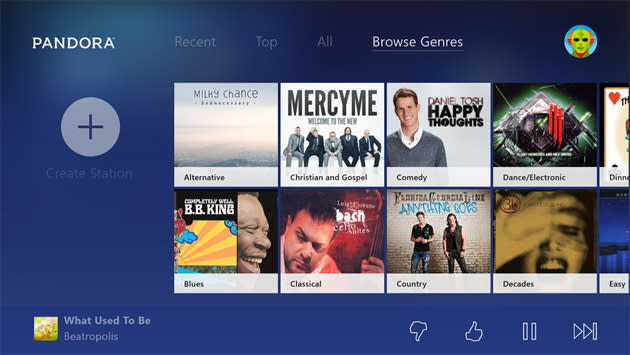 You haven't had many choices for streaming music on the Xbox One so far; you've largely been limited to Xbox Music or the occasional YouTube mix. You'll have some proper options very shortly, though. Apps for both Pandora's internet radio service (US-only) and Vevo's music videos (in 14 countries) are reaching the game console this week. The two apps don't have any surprising Xbox-specific features in store, but they'll definitely help if you need some tunes for your next house party. And don't worry, movie and TV fans -- you'll get a few apps as well. Bravo Now and Telemundo Now let American TV subscribers stream shows from those networks on demand, while Popcornflix gives North Americans "hundreds" of free movies. If your Xbox One doubles as your media center, you're in for a treat in the days ahead.

In this article: bravo, bravonow, hdpostcross, internet, microsoft, music, musicvideo, musicvideos, pandora, streaming, telemundo, vevo, xboxlive, xboxone
All products recommended by Engadget are selected by our editorial team, independent of our parent company. Some of our stories include affiliate links. If you buy something through one of these links, we may earn an affiliate commission.