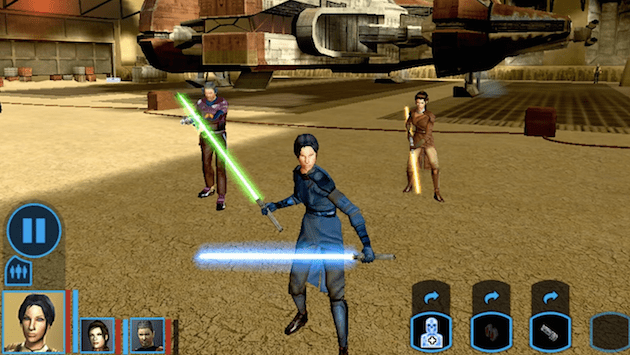 Attention, meatbags: If you somehow missed Star Wars: Knights of the Old Republic the first three times it was released, now might be your chance to finally fix that. How so? Well, BioWare's excellent role-playing game set in a galaxy far, far away is now available for Android devices. What's more, it's $5 on Google Play at the moment and, like the game's iOS counterpart, controller compatible as well. Given its complexities, you'll likely want to play it on a device with a sizable bit of screen real-estate. Regardless of just how big the Galaxy Note 4 is, however, things still might get a little cramped. Maybe living out your Light (or Dark) side fantasies on an NVIDIA Shield gizmo might be a bit more comfortable instead. Early Play Store reviews note that it's running pretty well on a variety of 'droids (including the two year-old Nexus 4), so maybe now is the time to find out what having a wookie life-debt is like.

Knights of the Old Republic is now on Android through the Google Play Store! http://t.co/bzQHrh45YW Get it now for a 50% launch discount!

Via: Aspyr Media (Twitter)
Source: Google Play
In this article: android, AspyrMedia, BioWare, gaming, google, hd, KnightsOfTheOldRepublic, kotor, mobilepostcross, StarWars
All products recommended by Engadget are selected by our editorial team, independent of our parent company. Some of our stories include affiliate links. If you buy something through one of these links, we may earn an affiliate commission.