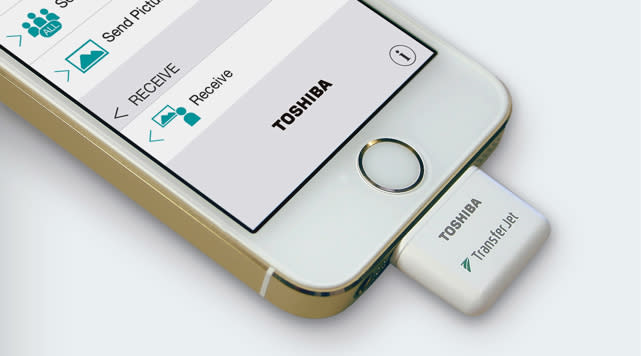 Toshiba is shooting for AirDrop lovers with a new wireless transfer accessory that can send data between iOS devices faster than ever before. The tiny little dongle has a maximum throughput of 375Mbps and can transfer upwards of 100MB between iOS gadgets in just a few seconds, making it perfect for photo and video transfer.

The dongle itself has a rather unsexy name (TJM35420LT) but it runs on Sony's TransferJet (oooh, that's better) technology. Like NFC, the transfer can only take place if two TransferJet devices are within a few centimeters of each other, but unlike NFC the TransferJet technology is specifically suited to large transfer jobs rather than quick authentication or payments.

The accessory will be made available in Japan to start, priced at around $40, with a worldwide rollout coming sometime later.

[via PCWorld]
In this article: accessories, ces 2015, ios, news, sony, toshiba, transferjet
All products recommended by Engadget are selected by our editorial team, independent of our parent company. Some of our stories include affiliate links. If you buy something through one of these links, we may earn an affiliate commission.