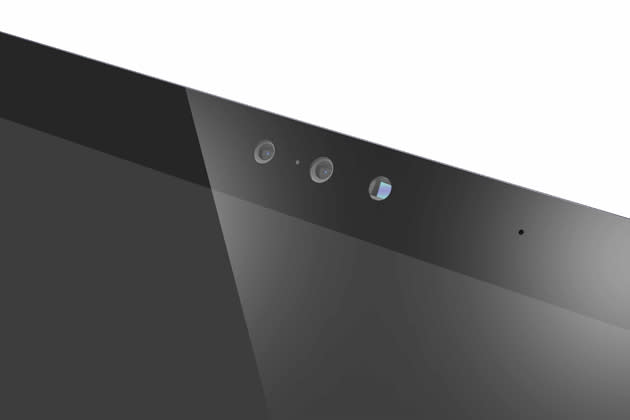 In case you haven't noticed, Lenovo is showing off an insane amount of stuff here at CES 2015. Tablets, smartphones, a smartwatch, laptops, more laptops. Now, rounding out the list, we're seeing the company's latest desktops. Of the three, there's only one you probably want to know about, and that's the B50, a 23.8-inch all-in-one with Intel's RealSense motion-sensing 3D camera setup (as pictured in the above close-up). As it happens, you're going to be seeing RealSense on a lot of gadgets this week at CES -- everything from laptops to tablets to desktops like this. Depending on the form factor -- and also the specific company -- the use cases for that 3D camera are going to differ a little bit each time. After all, there's no accounting for what software they pre-load on the machine. In the case of the B50, though, Lenovo seems to be pushing the gaming angle -- in a demo, I played a game where I lifted soldiers to safety using an onscreen hand (operated by my real hand, of course).

On the inside, this will ship with last year's fourth-generation Intel Core processors, at least in the beginning. It will also run whatever NVIDIA's next-gen graphics are (always a little tricky talking about these things when NVIDIA hasn't actually detailed its new GPUs yet). As for the screen, it's a 1080p affair -- not super-high end, at least not as far as pixel count goes, but the IPS panel does at least provide good viewing angles. Look for it in March starting at $1,249.

Last but not least -- we do want to be thorough, after all -- we'll give you a quick rundown of those other two, less exciting desktops. These are the entry-level C40 and C50, which have 21.5- and 23-inch screens, respectively. Though they're lower-specced (older NVIDIA graphics with last year's Intel Core processors), they at least have a fairly streamlined design, with a slimmed-down frame and virtually no bezel around the 1080p IPS screen. These also arrive in March, starting at $429 and $729, respectively.

11
In this article: all-in-one, all-in-ones, b50, c40, c50, ces, ces2015, desktop, intelrealsense, lenovo, lenovob50, lenovoc40, lenovoc50, realsense
All products recommended by Engadget are selected by our editorial team, independent of our parent company. Some of our stories include affiliate links. If you buy something through one of these links, we may earn an affiliate commission.