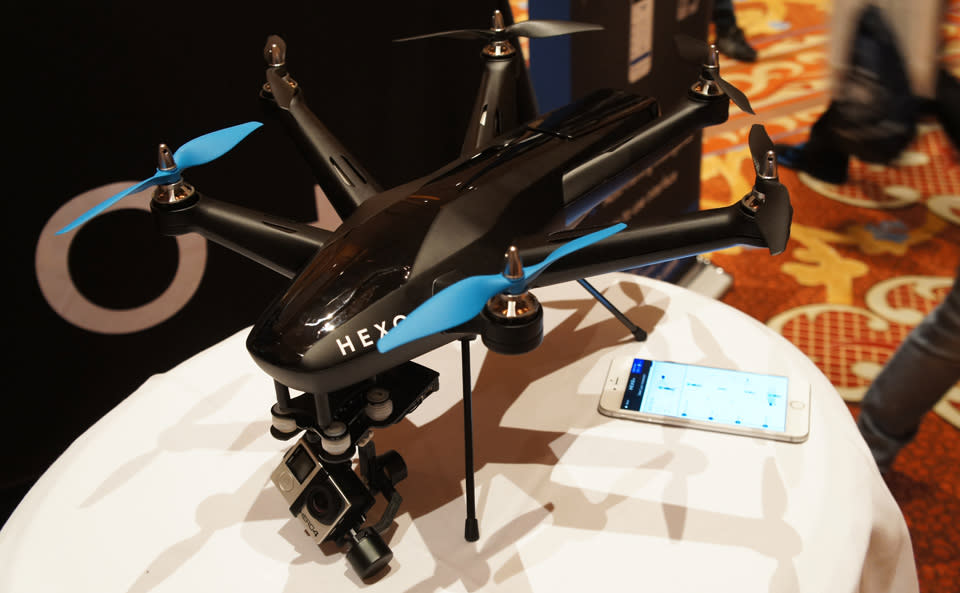 If you're in the market for a drone, you won't be short of choices in 2015, if CES is anything to go by. Even if it's one that follows you. Hexo+ is no new kid on the block, though. We actually saw it back in the summer when it launched on Kickstarter the same week as that other follow-you drone, AirDog. A rivalry no doubt heightened by the fact that both campaigns bagged almost identical amounts of money ($1.3 million) in funding. Until now, though, any evidence of a physical Hexo+ had remained out of view. With just the occasional teaser clip of sample video to whet the appetite. Finally, here at CES, we get a look at the drone itself. In the fairly utilitarian world of multirotor-design, it's a stealthy-looking piece of kit. The six sets of rotors give it a more aggressive appearance, and the blue front props add a splash of color. Of course, looks are one thing; another is seeing it do its job. Sadly, that's not possible in the confines of a Las Vegas exhibition hall, but all going well, we'll remedy that later in the week. 8
In this article: CES, ces2015, drone, gadgetry, gadgets, gear, hands-on, hexoplus, MultiRotor, TL17DRNFLW
All products recommended by Engadget are selected by our editorial team, independent of our parent company. Some of our stories include affiliate links. If you buy something through one of these links, we may earn an affiliate commission.