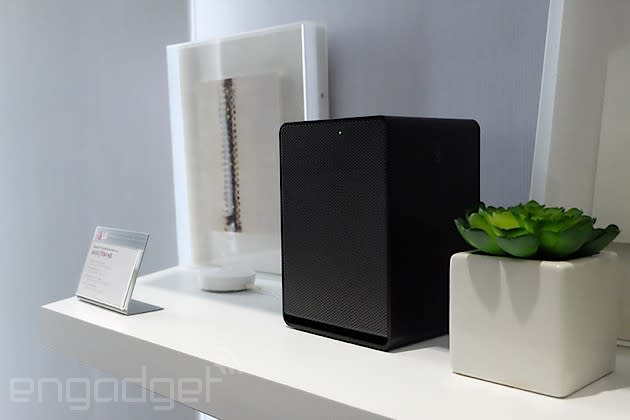 LG debuted its Music Flow series of wireless speakers last summer, offering a range of speakers targeted squarely at competitor Sonos' products. More recently, it moved away from aping Sonos with the H4 Portable, a battery-powered speaker that acts just like its larger siblings. At CES 2015, we took a closer look (and listen) at the whole Music Flow family.

The way Music Flow works is a hybrid of Sonos and a traditional Bluetooth or NFC speaker. You can pair speakers with a phone via NFC and dedicated apps for iOS and Android, or you can control them directly over a WiFi connection. They speak with one another over WiFi, but need a hub to do so -- a requirement Sonos recently dropped. Although the CES show floor isn't the ideal place for a scientific listening session, LG does have a small room filled with its various speakers that at least gave us a decent idea of how they sound. The H4 Portable offers a comparable experience to a tiny Bluetooth speaker like a Jawbone Mini Jambox, but with the benefits of a Sonos-esque WiFi setup. It's also able to play back quite a bit louder than the Mini Jambox without distortion.

As for the rest of the lineup, it's functional, but uninspiring. The H3 is similar to the Play:1 it's up against; the H5 is comparable to the Play:3; and the H7 -- Play:5 -- is also comparable. Across the range, mids and highs seem to have been compromised for the sake of bass, and because of this, everything sounded a little muddier than the equivalent Sonos, although both the H3 and H5, like the H4 Portable, were able to pipe music out at higher volumes than the Play:1 and Play:3 without distortion. There's also a soundbar called the H6, which features four speakers, a mini-sub and also negates the need for a hub. LG plans on introducing a seven-speaker version that would come closer to Sonos' nine-speaker Playbar.

The one thing the lineup has over Sonos -- and it's new for CES -- is compatibility with Google Cast, the equivalent of Chromecast, but for music. Supporting a standard that looks set to achieve widespread adoption is definitely a good move for LG, as it instantly adds app like Google Music, Pandora, Rdio, TuneIn and others to its compatibility list.

LG is being coy about a release date for the US, although the system is definitely coming to North America. It also refused to discuss pricing, which is strange as the entire plug-in range is already available over the pond. In the UK, the speakers are in line with their Sonos alternatives, so expect the H3 to come in at around $200, the H5 at around $300 and the H7 at around $400. As for the H4 Portable, an educated guess would price it somewhere in the $100 range.

In this article: ces, ces2015, hands-on, hdpostcross, lg, musicflow, sonos, video, wireless speaker
All products recommended by Engadget are selected by our editorial team, independent of our parent company. Some of our stories include affiliate links. If you buy something through one of these links, we may earn an affiliate commission.