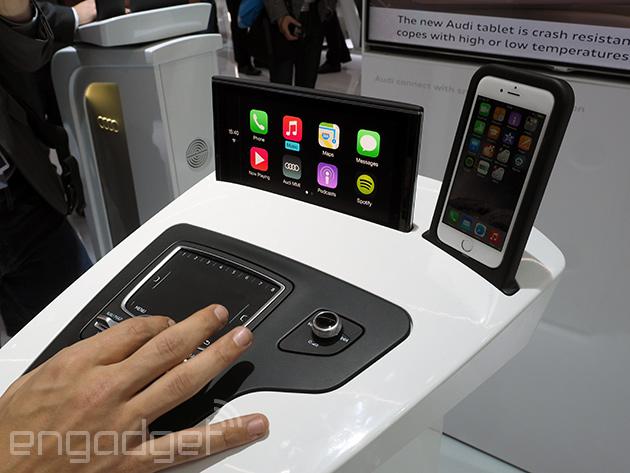 It seems Audi's Q7 is brand agnostic, at least in the Android vs. Apple battle: It hasn't yet chosen between Android Auto or CarPlay. The demos at CES this week are set shoulder to shoulder with Audi's HMI (Human Machine Interface) connected to either an Android device or an iPhone. Using the MMI knob -- if you've been in an Audi before -- is as intuitive as you remember, but instead of navigating through the factory system, you're now going to be using your phone interface. Once you've selected either CarPlay or Android Auto from the main menu, the phone's interface takes over. The steering wheel includes a button to activate Siri or Google Now for voice input and the wheel will scroll you through either system's menus. No surprises here as far as functionality, but the fact that the carmaker began to support both almost as quickly as heavyweights like Pioneer is an impressive feat. Look for this in Audi cars starting with the 2016 Q7 when it starts hitting showrooms this year. We look forward to couples everywhere finally settling the "Apple is better/Android is better in a car" question once and far all. In this article: androidauto, audi, carplay, CES, ces2015, hands-on, video
All products recommended by Engadget are selected by our editorial team, independent of our parent company. Some of our stories include affiliate links. If you buy something through one of these links, we may earn an affiliate commission.