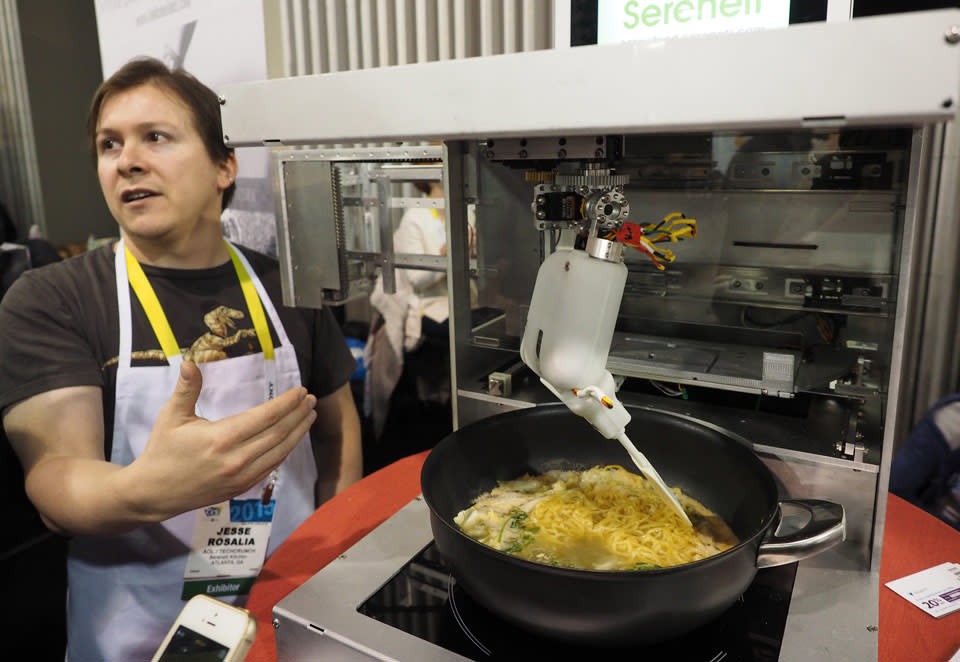 When I try to picture what a live-in robot that makes fresh, hot meals would look like, a lone mechanical arm isn't exactly what springs to mind. That might be a slightly oversimplified description of Cooki, a prototype "robotic automated cooking" machine from up-start Sereneti Kitchen, but it's not far from the truth. In addition to its multidirectional arm, the sum of the device also includes a hotplate, and a mechanical tray arrangement for holding ingredients. The long and short of it is: You fill trays with a selection of fresh ingredients -- they correspond to a specific recipe, of course -- and choose the matching meal from within an app. A preprogrammed series of events then plays out, with the dish on the hotplate brought up to the correct temperature, ingredients added at the correct intervals and the arm, well, kind of pushing it all around until it's ready to serve. The idea is that anyone who can't cook, or is too busy or lazy to, can still eat fresh meals by getting Cooki to do the hard work, instead of opting for an unhealthy microwave dinner. The definition of "fresh" is a loose one, though. The Cooki concept extends beyond just the device -- Sereneti wants to create something of a food distribution and subscription service to go with it. Similar to Keurig coffee machines, meals would be delivered in prepackaged form. You'd plug the several, sealed trays into Cooki, and out pops your food. The machine wouldn't be limited to only accepting proprietary ingredients' trays, though. You could still buy fresh ingredients from a store to use with the machine, but then there's a consistency issue. Depending on age and how thinly they're chopped, vegetables need to be cooked for different amounts of time. Cooki can't account for these disparities. Furthermore, you'd have to do the prep yourself, which kills the convenience aspect.

For Sereneti to be in the position to actually deliver on its vision, it would have to lock down some pretty serious partnerships with food manufacturers, and leverage their existing distribution networks, too. They would have to build tray-filling into their processes, and even license the proprietary design if they wanted to make branded meals that work with the device (think of a pasta sauce maker creating its own, branded Cooki spaghetti meal). To Sereneti's credit, its business model is far from half-baked, but now it's got the "chicken and egg" problem. In the same way a new mobile OS is extremely hard to pull off -- because nobody wants a phone with five apps and developers won't waste time making apps for a platform nobody uses -- Sereneti has to persuade people to buy the Cooki before it can start convincing food providers to buy into the "ecosystem," if you will. It also appears the company is so focused on the bigger picture that it's lost sight of its primary goal: getting people to buy a robot chef. And that's going to be extremely hard, because the machine is so basic, it's almost pointless. It's only capable of making "one-pan meals" like stir-fry, pasta and curry dishes, or warm salads -- that kind of thing. Essentially, the type of food that the target demographic of lazy, busy and inept folks rely on already. Something that pushes ingredients around a pan for five minutes isn't going to do anything to change eating habits, and it's easy to see why Sereneti's Indiegogo campaign hasn't gained any traction, despite tons of press attention and a spot in the TechCrunch Hardware Battlefield at CES. It doesn't help that you need to pledge $449 for a Cooki of your own, or $99 and a commitment to buy $49 of prepackaged meals per month for three years after delivery (that's $1,863 in total). Currently, Sereneti has raised just over $3,000 of its $100,000 goal. Despite its grand ambitions, the campaign seems, unsurprisingly, doomed to failure.

In this article: ces, ces2015, cooki, cookingrobot, robot, robots, sereneti, serenetikitchen
All products recommended by Engadget are selected by our editorial team, independent of our parent company. Some of our stories include affiliate links. If you buy something through one of these links, we may earn an affiliate commission.