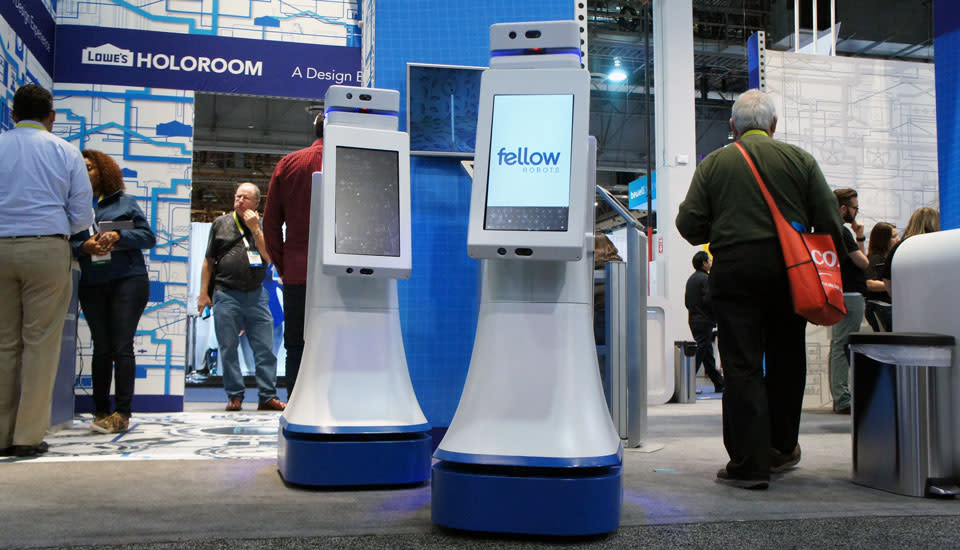 It's weird to think that a humble DIY store is making groundbreaking strides to innovate retail stores, but that's what Lowe's Innovation Labs was set up to do. The company unveiled two pretty neat concepts for the future of shops in the last few months: a robotic store assistant that patrols the aisles of an Orchard Supply in San Jose, and a virtual reality interior-decoration tool that's currently in operation in two stores in Toronto.

I took a look at OSHBot (presumably short for Orchard Supply Hardware Bot), and because it was at CES, it wasn't able to lead me straight to the tool I wished to purchase. The audio recognition wasn't working thanks to the din of the show floor, but I was able to use the forward-mounted touchscreen to search for a hammer, and I was able to pick out the option that I wanted. Had I actually been in the San Jose store, the bot would have led me down to its precise location, all the way showing me adverts for various special offers on its rear screen. The company is already working on new innovations for the droid, including using the depth-sensing camera to recognize any broken object, say, a damaged lug nut and point you in the direction of a replacement.

Lowe's other big innovation is a product called Holoroom, which enables people to visualize DIY projects before they begin. If you're fortunate enough to live in Toronto, then you can set up a room online and then, at the store, walk around it using an Oculus Rift to make sure you're happy with it. For now, the company has just digitized the products from its bathroom catalog, and there is some novelty in being able to see what a bathroom will look like. The company is pledging that its kitchen offerings will be the next to be added, and so far it's been a big hit with contractors who are using the system to coerce unimaginative users into signing off on plans. It's small beginnings, but Lowe's Innovation Labs is teaming up with futurists, sci-fi writers and comic book artists to come up with new ways to buy a hammer.

In this article: CES, ces2015, hands-on, Holoroom, Lowes, Lowes Innovation Labs, OSHBot, video
All products recommended by Engadget are selected by our editorial team, independent of our parent company. Some of our stories include affiliate links. If you buy something through one of these links, we may earn an affiliate commission.