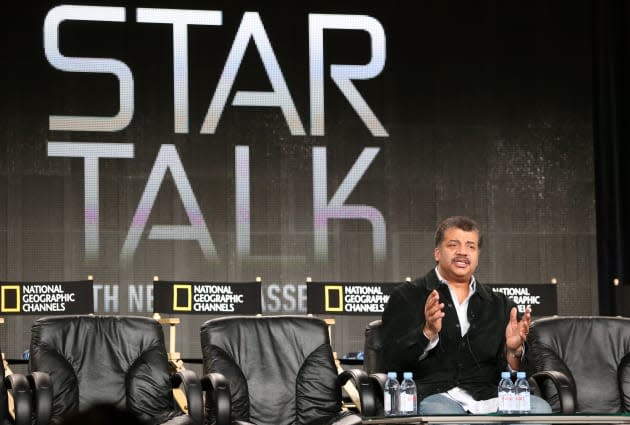 Fans hoping for a Neil deGrasse Tyson fix this year needn't worry if Cosmos will be renewed -- the astrophysicist will bring his popular StarTalk podcast to the National Geographic Channel. The new show will be filmed before a live audience at the Hayden Planetarium in a Bill Maher-style roundtable format featuring comedians and celebrities. Tyson said that because the established podcast is already streamed on video, the show "is kind of low-risk, I think, for National Geographic." He added that it'll let him "continue to spread wonder and excitement (of Cosmos) through Star Talk."

There's no word on the exact format, though each episode will feature a short segment by none other than Bill Nye. It's also unclear whether Tyson will return for Cosmos, though he was reportedly leaning against it due to the show's punishing schedule. StarTalk will arrive this April on National Geographic, with the time to be announced later.

In this article: Cosmos, hdpostcross, NationalGeographic, NeilDegrasseTyson, StarTalk, video
All products recommended by Engadget are selected by our editorial team, independent of our parent company. Some of our stories include affiliate links. If you buy something through one of these links, we may earn an affiliate commission.