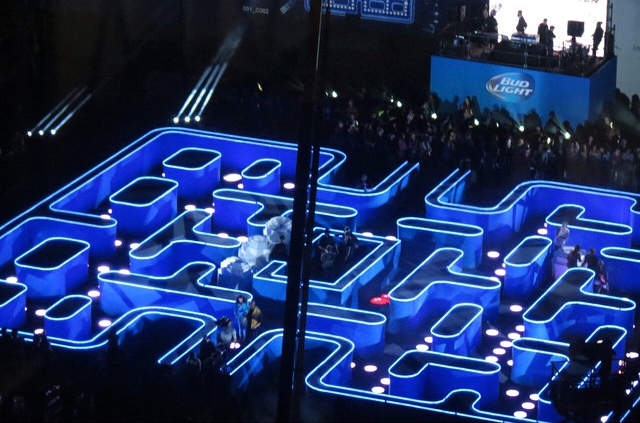 It appears someone on the Bud Light marketing team has shared our daydreams about emulating video game moments in real life. As you can see above, the difference between us is a substantial, dream-fueling marketing budget – according to Game Informer's take on a Chicago Tribune report, this life-sized Pac-Man maze was built in LA's Fashion District to be used in a 60-second Super Bowl commercial called "coin." In the ad, a man will reportedly find a message in a beer bottle that instructs him to go outside, where he will be given a giant coin for use toward a round of real life Pac-Man.

We've taken the liberty of mailing a revised script to Budweiser, in which the man graciously gives up his chance to sprint through a glowing, Ghost-plagued maze so that all of us can have a shot instead. The script also notes that we will all run the maze perfectly, thereby forcing Budweiser to build six-foot-tall Ms. Pac-Man-themed mazes in our backyards. For free.

We'll be sure to alert you all once our revision is cleared.
[Image: LA Fashion District]
In this article: budweiser, commercial, jealousy, pac-man, pac-man-maze, super-bowl
All products recommended by Engadget are selected by our editorial team, independent of our parent company. Some of our stories include affiliate links. If you buy something through one of these links, we may earn an affiliate commission.