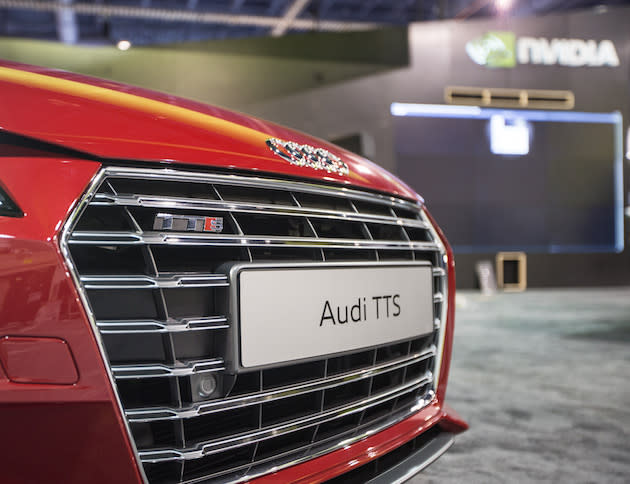 One of the biggest surprises at this year's Consumer Electronics Show was just how deep NVIDIA is getting into the automotive field. Given how reliant on armies of sensors the autonomous cars of the near future will be, however, it makes sense that the company best-known for its desktop computing power is at the forefront of transportation tech. We briefly spoke with the company's senior manager of automotive technology, David Anderson, about where he sees driver-less cars going, how long it'll take to get there and how the insurance industry might react once we do.

How far off are we from seeing this autonomous tech in a production model vehicle?

Last year we talked about the integration of K1 technology into Audi's Z-Fast programs. That represents the start to semi-autonomous and will lead to fully autonomous driving. The uptick of the technology is happening as we speak and literally everything we're doing, we're working with all the major automotive OEMs today engaged at some level or another of developmental research.

Ford's and Volkswagen's moves to autonomous cars seem realistic and measured. Mercedes? Not so much.

Everybody has different ways of looking at that and a large part is it's sort of a corporate vision of the OEM that's guiding how fast it's going to move. I can only tell you that each of them approaches it differently and some of them are more aggressive than others in terms of how fast the tech is being integrated.

The interesting thing to remember in any of it is, regardless of how fast the auto OEMs move, it's the legal ramification and the legal liabilities associated with the infrastructure that ultimately will have to change to accept the technology -- that gates us more than anything. To be quite honest, we've got the building blocks in terms of what you see here to do it today, but the reality of it is the structure and infrastructure as a whole has to change. If autonomous cars are totally safe, does insurance need to exist?

There are definitely some interesting paradigms that have to be looked through in terms of the execution of all that. I don't think anybody quite knows how that one's going to work out yet. One example to think about is insurance companies are embracing this technology of connected cars through the OBD2 port with customers uploading vehicle data for usage statistics.

You're talking about premium breaks based on driving habits, right?

Right. So that would be an example that says the acceptance of the technology might come faster because there's a ramification for lowering or modifying the way that insurance is applied to semi-autonomous and computer-controlled vehicles. We don't know any of that yet, but it's an idea that fundamentally could happen.

In this article: audi, automobile, CES, ces2015, DavidAnderson, mercedes, nvidia, transportation
All products recommended by Engadget are selected by our editorial team, independent of our parent company. Some of our stories include affiliate links. If you buy something through one of these links, we may earn an affiliate commission.